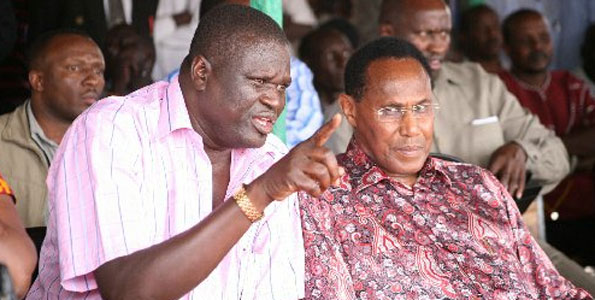 Below is the full statement by government spokesman

The Government has taken note of the contents of a feature broadcast in English and Kiswahili on one of the major media stations concerning the proceedings of the Commission of the ill-fated helicopter registration 5YCDT AS 350 B3e, that crashed in Kibiku forest, Ngong, on 10thJune 2012 killing all on board including the then Minister for Internal Security, Hon. George Saitoti and his Assistant, Hon. Orwa Ojode.

The feature story insinuates that the Commission set up to â€˜investigateâ€™ this fatal crash failed to address gaps that emerged during its proceedings.

We wish to state from the onset that the Commission was not an investigative authority but a â€˜Commission of Inquiryâ€™ that had very clear and elaborate terms of reference.

The report and recommendations that this Commission has come up with are based on a thorough evaluation of the evidence that was adduced before the commissioners together with the evaluation of the technical reports that were presented by the various accredited aviation experts and agencies, both local and foreign.

It should be recalled that the Commission made not less than five public appeals and invitations through the print and electronic media for anybody with information or evidence that led to the fatal crash to present it to the Commission, either by person or by way of a memorandum. Several persons and entities responded. The Commission eventually managed Sixty Six (66 no.) witnesses, who appeared and were heard in the public sittings.

While it is within their rights for the journalists who produced the feature story to embark on their assignment, it would have been prudent for the so called evidence collected to be brought before the commission for canvassing and interrogation by the counsels present and the interested parties to ascertain its veracity.

We therefore wish to advise the public to treat the feature story as fabricated untruths and see this feature story as a diversion that is being fronted by personalities or entities that were shy or not willing to appear before the Commission.

The report of the Commission is now in the public domain and can be accessed on myoffice website www.communication.go.ke and further on http://www.scribd.com/doc/136740677/Commission-of-Inquiry-Final-Report-5ycdt-12th-Feburuary-2013.Further, the Government has instructed the relevant authorities to take up the recommendations as a matter of urgency so that justice can be dispensed.Â

Finally,the Government urges the producers of the feature story and media personalities in general to be sensitive to the plight of the members of the affected families. They should exhibit a sense of humanity by exercising responsible journalism while handling reportages of this nature. We are aware of the freedom of the press which we promote and uphold, but every freedom carries a responsibility, lest we infringe on other peopleâ€™s rights.