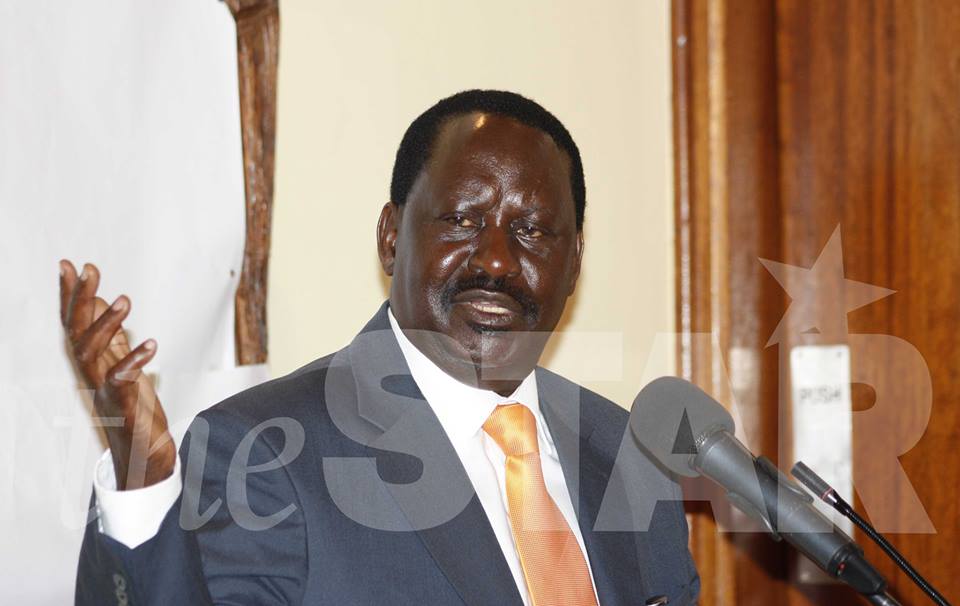 Raila Odinga’s Address to Law Society of Kenya: DEVOLUTION IN KENYA: PROSPECTS, CHALLENGES AND THE FUTURE

The Chairman of the Law Society of Kenya,

Members of the Council of the Society,
Attorney General,
Senior Counsels present,
Invited Guests,
Ladies and Gentlemen,
I consider myself well-travelled across the width and breadth of our country. I have travelled across Kenya as a political activist, a Member of Parliament, a Cabinet Minister for Energy, for Roads, a Prime Minister, and now, an opposition leader. From that experience, I got convinced beyond doubt that Kenyans want Devolution of power and resources.
The story of devolution in Kenya is of a peopleâ€™s struggle for justice and the expectation for equality, equity, and inclusion. It is a fight against domination, subjugation, and exclusion.
Against slavery, Abraham Lincoln told the American peopleâ€¦..â€A house divided against itself cannot stand. I believe this government cannot endure; permanently half slave and half free.â€ I can say with certainty that Kenya too cannot endure permanently half poor and half rich.

As was the war on slavery, devolution is an effort to address the wrong principle that saysâ€¦.you will work and toil and earn the bread, but I am the one who will eat that breadâ€¦Every part of Kenya must get a fair reward from its taxes. There is no better way to achieve this than through devolution.
LADIES AND GENTLEMEN;
Devolution unfortunately has powerful enemies in high places. Devolution is running into a brick wall of a political class that has benefited from an over centralized system of government.Â It is being undermined by a status quo that has captured the instruments of the state and has used them to secure privileges for themselves and their children, to the exclusion of everyone else.
The good news is that the rank and file of our people is determined to make Devolution succeed.
In the few months that the Counties have taken off, our people have been engrossed in learning the art of government. They are getting used to making own decisions.Â They are moving away from the culture of blaming others for their problems. They have tried to take their future in their own hands.Â A few weeks ago, voters in Makueni County rejected the backward talk that they needed a Jubilee senator so they can be close to the National Government. They proudly elected Senator Mutula Kilonzo Junior knowing well he was going to join the opposition. The people of Kenya no longer feel that they have to be close to central government to progress. Waiting for help from Nairobi has begun to look like a deep prehistoric practice that no one wants to remember.

LADIES AND GENTLEMEN;
This is the kind of freedom that devolution brings. It is the freedom that the controllers of the centralized system are hell bent on killing. This is the fight our governors and senators have embarked on. They are pushing for a country where the National Government exists only to facilitate the people and protect them from outside aggression.

The over-centralized system of the last 50 years bequeathed us little in terms of progress and plenty in corruption. Corruption helped those in power to hold hungry citizens at ransom and lead them down the garden path.Â By centralizing the tendering for roads, the purchase of drugs, the construction of houses, the provision of amenities like electricity, those who control the central government were able to strike corrupt deals that kept them financially powerful and able to control the rest of Kenyans.
KANU went many desperate steps further. It instituted a modern day slavery, which saw the State use even relief food as a tool to control how people voted and how they related with the State.

LADIES AND GENTLEMEN;
Itâ€™s saidâ€¦ â€œHistory Is So Beautiful It Makes You Cry.â€ So let me tell you abit of where it all began and why we should be wary at the pattern of events.
At independence, our founding fathers settled on a devolved system after it became clear that the political system of the country was already leaning towards a centralized dictatorship.Â This dictatorship was in the hands of those who had accessed colonial education and economy. The losers were those who had missed out on colonial education. Ironically, those were the ones who had fought the British to a standstill and forced them to negotiate.Â Unfortunately, there wasnâ€™t sufficient understanding of the benefits of majimbo even among those who stood to benefit from it.
The masters of the status quo moved in and misrepresented the system as divisive, anti-unitary and anti-national. They intentionally bad mouthed majimbo, derided it at every opportunity and sabotaged it at every corner. Eventually, the beneficiaries of the devolved system themselves participated in its dismantling. The end result was an exclusive political and economic dictatorship that took fifty years to dismantle. Unfortunately, the noises have begun again.

LADIES AND GENTLEMEN;
The history of devolution is a constant and sad reminder of the dangers that face this nation. It teaches us that the forces of political autocracy and economic exclusion will, if allowed, frustrate any system of government tailored to create equality among the peoples and regions of Kenya.
It reminds us that there are those who took over Kenya from the colonial administration and are intent to own it and exploit it exclusively for their benefit and that of their cronies and families.
Their key tool is denying the outer regions control over resources and decisions so that everyone has to beg the central government even for basics like food and medicines.

Today, the beneficiaries of status quo are ganging up again, citing the same excuses invented about fifty years ago to kill devolution. They say some regions are not ready. They say some governors have given themselves presidential looks.
They paint governors as extravagant. They want governors who are in reality heads of their own governments, to seek clearance from central government before travelling abroad. They say the Senate has no role, is inferior to the National Assembly and should in fact, be abolished.
Rather than empower the people to help themselves, they want to retain critical services like rural electrification and roads at the centre so they can dish them out at will as a show of benevolence.You know, what happened once can happen twice. So we say; buyer, beware.

Fortunately, the Constitution of 2010 is a product of wide consultations with Kenyans and intense public education. No wonder the forces of status quo are having a rough time with the people.Â I would like to take this opportunity to congratulate the Governors for fighting for the decentralization of the construction of roads. I beseech them to fight for the decentralization of other critical areas like electricity, purchase of drugs and pharmaceuticals.Â This will eliminate the corruption perpetrated at the centre and which is used to oil the political machine that tramples on the people. More importantly, it will put the governors in charge of economic development in their regions.
To attract investment and ensure economic growth, you need a good network of roads, a steady supply of reliable, efficient and affordable electricity, and a healthy and educated workforce. No governor is going to guarantee these if they are ran by a separate authority.

LADIES AND GENTLEMEN;
I agree that our Constitution does not explicitly spell out how responsibility should be shared between Counties and the National government. But none of the challenges are insurmountable if we managed the process with good faith and if we embarked on honest dialogue between with all cards above the table.Â The forces of status quo are however using every challenge as a reason to delay devolution by one more day, one more month, one more year and forever. The intention of the centrists is to help devolution die a slow, painful death while all the time pretending to be trying to resuscitate it.
I believe strongly that the spirit of enterprise that has propelled Nairobi must spread outside. It must take off in Kwale, Malindi, Kakamega, Moyale, Homa Bay, Nyamira, Wajir, Marsabit and all parts of Kenya.Â Examples abound everywhere. New York remains immensely big as a city and a state in the US. Los Angeles is big, so is Chicago.

But none of these regions has ever entertained the idea that they are in any way more important than or can do without Washington, DC or the USA. All they do is power the US economy.
In Germany, you get another example of an economy driven from multiple centres. Munich is an economic powerhouse. Frankfurt is a financial centre. The Ruhr brings together a cluster of industrial cities; Berlin is the capital and artistic hub. Together, they power a bigger and powerful Germany that has withstood recession to which the rest of Europe succumbed.

LADIES AND GENTLEMEN:
Kenya too must create an economy that fires on all cylinders and runs on multiple engines by supporting many more sites and sources of economic growth.Â Empowering our counties so they innovate, attract outside investment; raise their own money and spend it in the ways they need is the way out.Â We must rise above the fear mongering and remind the forces of status quo that the purpose of devolution is not to dismember the nation but to allow different solutions to different problems in different circumstances.
This is why I want to appeal to the legal fraternity to support the push by the governors to amend article 203 (2) of the Constitution to raise the minimum revenue threshold due to county governments from 15 to between 40 and 45 per cent.
I equally appeal to you to support our senators in their push to amend Chapter Eight on Legislature and Chapter 12 on Public Finances to give them a greater say in legislations and sharing of revenue.
At a time the National Government can barely support itself, we cannot continue hoping that it will somehow help the rest of the country. Our future is in stronger, successful devolved units.