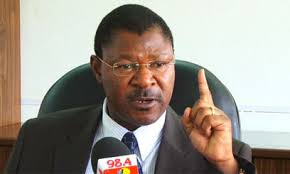 FORD – Kenya Leader Mr. Moses Wetangula today said he was focusing on politics of development and not hate as was being propagated by his opponents.

Addressing mourners at the funeral of Mama Rasoa Wangoro, step – mother to Webuye East MP Mr. Alfred Sambu in Misikhu, Mr. Wetangula said he was not bothered by the politics of insults that his opponents were playing in Bungoma adding that he has and will continue playing progressive politics.

Mr. Wetangula who is the CORD candidate in the Bungoma Senatorial by – election scheduled for the 19th of next month told Mr. Sambu who was present that his side should stop wasting time madslinging him.

“I have never insulted anyone. I expect the same from my colleagues. But they keep on calling me names everywhere they go” he told the mourners who cheered him up all through.

“Mr. Sambu is my very good friend but I want to tell him here today that he should be on the right side of history ” added Mr. Wetangula.

He said peace was the most important thing during and after the campaigns and exuded confidence that he will recapture the seat he lost in a petition.

Mr. Wetangula reminded the people of Bungoma of the need to elect leaders who had the vision not only for the county, but for the entire Luhya community.

“As I stand here today, am not just focusing on Bungoma only but looking beyond here” he said.

Wetangula received a standing ovation from the mourners when he arrived at the funeral, forcing the masters of ceremony to halt the speeches to give time for the mourners who were cheering him on to settle down.

Earlier Mr. Wetangula held meetings with supporters and voters in Chesamisi and Kamukuywa areas of Kimilili Constituency where he urged them to vote for him.