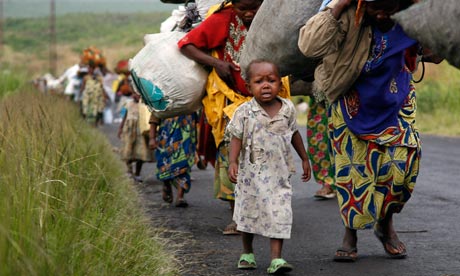 A crowd gathers around four bodies strewn over hardened volcanic rock. Children pull T-shirts to their noses and mouths so they don’t retch but cannot resist peering at the slain young men. Two are sealed inside green body bags but the job was left half-done, exposing a face and uniformed arm bearing the Congolese national flag.

Even in death these soldiers were neglected, their corpses uncollected two days after they fell defending the frontline, despite it being a short walk to the UN peacekeeping mission in Goma, the most prized city in the east of the Democratic Republic of the Congo. Most of their comrades ran for the surrounding hills or defected to the invading rebels, known as M23, instantly gaining higher pay, more food and crisper uniforms.

“All the soldiers here didn’t get support and had to fight alone,” said Sifa Mirindi, an unemployed 20-year-old drawn to the macabre visitor attraction beneath the Nyiragongo volcano. “The president didn’t help them. We can help M23 go to Kinshasa and remove the president because he does nothing.”

President Joseph Kabila is blamed for Congo’s disgrace, having surrendered Goma with hardly a fight to a group widely seen as a proxy of neighbouring Rwanda, a thorn in Congo’s eastern side for nearly two decades. Next, the rebels could threaten Bukavu in South Kivu, expanding their control over a vast swath of lush territory rich in coltan (used in mobile phones), gold and diamonds. They have even vowed to march almost 1,000 miles west to the capital, Kinshasa, and send Kabila the way of Muammar Gaddafi.

Fury at the feeble showing â€“ and at the impotence of the UN â€“ has led to riots and the burning of cars and buildings in Kinshasa, Kisangani and other cities. The loss of Goma was a massive shock and a symbolic fracture. Not for the first time, sub-Saharan Africa‘s biggest and most blood-drenched nation is facing an existential crisis. This unwieldy, failing state could begin to fragment.

The nightmare began more than a century ago when Belgian colonisers effectively set up a mass slave labour camp to plunder rubber and ivory, killing millions of people and chopping off the hands of adults and children. Congo was effectively King Leopold‘s personal fiefdom and has arguably never recovered. Then, after a fraught struggle for independence in 1960, it nearly broke apart as regions turned on each other.

The holding centre of gravity was Mobutu Sese Seko, who seized power in 1965 and plundered about Â£3bn while Zaire, as he named it, collapsed into a series of city states with railways, roads and mail falling into ruin. Amid the rutted roads of Goma, which he seldom visited, Mobutu maintained a palace with six black Mercedes and the city’s sole ambulance.

The vicious kleptomaniac was eventually overthrown after losing his cold war sponsors in the west. Then, as now, the threat came from the east and Rwanda, where 800,000 people had been butchered by Hutus in the 1994 genocide. When Mobutu sided with the Hutus, Rwanda’s new government backed Tutsi militias which fought their way to Kinshasa and installed Laurent Kabila as president in 1997.

Kabila, who swiftly renamed the country, soon fell out with Rwanda and found himself under threat in turn. He begged neighbouring countries for help, triggering the deadliest war in African history. Kabila was assassinated in 2001 and replaced by his son Joseph, who is increasingly perceived as weak, ineffective and not up to the job.

Hutu extremists in eastern Congo launched an armed group and pledged to “liberate” Rwanda; Kigali has responded by sponsoring a series of militias of which M23 is seen as the latest.

The Congolese government has said: “We consider Congo as a country that is under foreign occupation.” It is humiliating for many Congolese, who occupy a mineral-rich land a hundred times bigger than Rwanda, yet now lag militarily and developmentally.

“We are in shame,” said Dr Simplice Vuhaka, a trauma surgeon at the Heal Africa hospital in Goma, which is receiving victims of the fighting. “Everyone knows how the national army was treated: no food, no salary. My brother is a soldier. I advised him to withdraw and join M23 and he did. The M23 people are proud now and they see Kinshasa. They’re very able to reach it because people are tired. I don’t know the future of Congo.”

The government, riven with corruption and ineptitude, is deeply unpopular with all but the small elite who milk it. Possible scenarios include M23 overthrowing Kabila or a coup by military officers incensed by his weakness, similar to that in Mali earlier this year. There are fears of wider instability and that anti-government sentiment could tear this nation of 450 tribes apart.

For Vuhaka, Balkanisation is unthinkable. “I see things in a demographic way. In a big country, people are swallowed. If you try to divide the country, someone will be in a minority somewhere. We will be like Europe when it was at war for three centuries. Having M23 in Kinshasa would be better.”

Despite the suffering and hurt pride, many Congolese loathe the idea of giving up on the state. Bolingo Kambere, 35, a hospital chaplain, said: “The important thing is a government which can show whether something is big or small. There is only one house and it depends on the administration.”

Kambere threw himself to the floor of his home when an M23 bomb destroyed the roof of a nearby house, costing one resident a limb. He has seen Goma endure biblical suffering, for instance when tens of thousands of Hutu refugees died from cholera as volcanic ash blotted out the sun. “I think as a servant of God, we can question why,” he said. “The response is that people forsake the law of God. That’s why we have widows, orphans, women who are raped.”

Amid the chaos, some are even nostalgic for Mobutu who, like strongmen before and since, presided over relative peace and unity. The current government retained power last year in an ostensibly democratic but flawed election in which its troops opened fire on the opposition.

A source at the UN, who has lived in Goma for years, said: “The country is too big for the current elite and the capacity of the Congolese today. It is rotten. The problem in eastern Congo is not Rwandan strength but Congolese weakness. The people are hopeless, hopeless.”

The source dismissed the notion that Rwanda was still protecting its border from Hutu extremists as “something only people in Britain still believe”. He added: “It’s about power and controlling all sorts of resources. A Tutsi minority rules Rwanda and they know it’s not going to be forever. They have to fight every day it lasts.”

Even by Congolese standards, Goma has endured much in its history, from mass looting by the army to the arrival of a million Rwandan Hutu refugees, years of cross-border wars and, in 2002, a volcanic eruption that poured a tide of lava through its heart. The bodies of the soldiers who died on the frontline this week were eventually collected by the Red Cross, whose staff were dealing with a power cut. “In Goma we are living under a volcano,” said one staff member, Joseph Matumaini. “One day, there could be another eruption.”