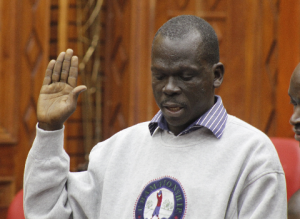 Comrade Wafula Buke has been appointed the acting Executive Director of the Orange Democratic Movement. BukeÂ will steer the party ahead of disciplinary hearings against former executive Director Magerer Langat.

Buke is the Director of Strategy of ODM and a long time Raila ally.

A decision to subject Mr Magerer to disciplinary hearings was reached when the party’s NEC met to discuss the conduct of Nairobi MCAs who ejected him out of the CORD coalition meeting at Orange House.

Buke said he has the blessing of party leader Raila Odinga.

“Call him right now, you will be surprised by what he will tell you. He is fully aware,” he said.

Buke said all four directors have endorsed him, but during the meeting, only two, Rosemary Kariuki and Phil Etale, were present.

Etale, the Communications director, avoided the briefing saying he was not part of it.

A NEC meeting on Tuesday formed a disciplinary committee, chaired by lawyer Fred Athok, and gave it 10 days to complete the inquiry and report back to the NEC. The supreme organ will then make a ruling on Magerer’s status.

Magerer snubbed the meeting convened to deliberate on the circumstances under which rowdy Nairobi MCAs frog-marched him from a Cord meeting at Orange House last week and dumped him outside the main gate.

â€œMagerer did not attend, although he was invited. The NEC has resolved to institute a team that will look into serious disciplinary issues that have been raised against the executive director,â€ secretary general Anyang’ Nyong’o told the press after the meeting.

Raila, who chaired the crisis talks, drove out of Orange House immediately after the meeting and did not attend the press briefing.

The party Tuesday imposed a collective fine of Sh100,000 on the 10 MCAs who attacked Magerer but said the allegations levelled against him are serious.

Magerer’s future in ODM now hangs in the balance after the NEC hinted that its five-member team will look at the “serious” allegations against him in making a decision.

Additional reporting by the Star.