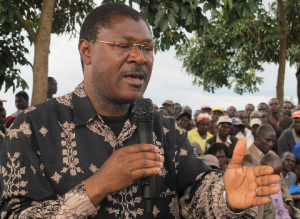 Moses Wetangula is on the spot for a series of comments he has made regarding land acquisition, land grabbing and squatters problem in Kenya. The National Alliance Party of Kenya whose leader is Uhuru Kenyatta has made complaints to IEBC alleging that Hon. Wetangulaâ€™s comments ponder on hate speech.

Itâ€™s a well known fact among Kenyans that the Kenyatta family owns huge tracks of land that may be equivalent to a 9th province, to many this is just stating the obvious and any purported legal action taken by TNA is a distraction aimed at shield Mr Kenyatta and his family from public scrutiny.

TNA claims to be possession of an audio recording of the statement that Wetangula made while on the campaign trail on January 22nd. Wetangulaâ€™s alleged utterances have been transcribed thus;

â€œMy brother, my friend Uhuru Kenyatta, has no capacity to lead this country and doesn’t deserve to lead this country. Because we know that that land was not bought, it was grabbed, and now it is being sold so as to get money to bribe people to vote for them so that they can get back into power. And we are telling you, you must refuse this.

In an interview on Citizen TV Wetangula said he cannot engage junior TNA party officers, he however defended his statement; here is the full interview with citizen TV.

It should be noted that Wetangula is an advocate of the High Court of Kenya of long standing and has handled landmark cases in his legal practice including the Post 1982 Coup attempt Treason Trials, University of Nairobi Post 1986, Disturbances Trials, Commission of Inquiry into the disappearance and Subsequent death of Dr. Robert Ouko, the Late Foreign Affairs Minister of Kenya.