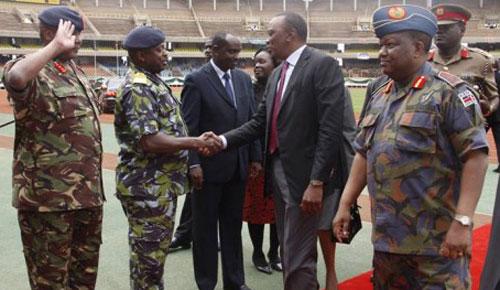 The Kenya Defence Forces has been accused of colluding with Al-Shabaab terrorists in Somaliaâ€™s illegal multi-billion-shilling charcoal trade.

A damning new report by a US government-funded organisation, which echoes earlier findings by the United Nations, alleges that the KDF mission to Somalia under the African Union appears to include the charcoal trade in one of the most stinging criticisms of Kenyaâ€™s presence in the neighbouring country.

â€œKenya, although formally a participant in Amisom, which operates in support of the Somali national government, is also complicit in support of trade that provides income to Al-Shabaab, its military opponent both inside Somalia and, increasingly, at home in Kenya,â€ says the Institute of Defence Analyses (IDA) report by Mr George Ward, formerly Washingtonâ€™s ambassador to Namibia.

According to the report, there are about 70 businessmen â€” located in the Somali port city of Kismayu that is controlled by KDF, and in Garissa and Nairobi in Kenya â€” who are brokers in the charcoal trade. The report does not name any individuals.

Denied allegations
Kenyaâ€™s military chiefs have previously denied allegations of involvement in any illicit activity in Somalia and have maintained that since October 2011, they have only engaged in military action aimed at stabilising the war-torn country. But the accusations, which first surfaced last year, have refused to go away.

KDF did not respond to questions e-mailed by the Sunday Nation on the fresh allegations. Yesterday, a communication officer who talked to us by phone promised to reply to our inquiries, but he had not done so by the time of going to press. KDF Chief General Julius Karangi was said to be out of the country on official duty.

The IDA is a non-profit organisation funded by the US government. It is the second institution to accuse KDF of complicity in the illicit charcoal trade in Somalia after the UN Security Council last year published a report documentating similar accusations.

â€œSince the charcoal trade is Al-Shabaabâ€™s primary income, it is not an exaggeration to posit that a portion of the resources used to carry out terror attacks in Nairobi and in Mombasa and other locations along the Kenyan coast is being generated with the acquiescence or even the cooperation of the KDF and Kenyan business interests,â€ says the report.

According to a recent report prepared jointly by the United Nations Environmental Programme (Unep) and Interpol, Al-Shabaabâ€™s primary source of income appears to be from informal taxation at roadblocks and ports.

â€œIn one roadblock case they have been able to make up to $8 million (Sh696 million) to $18 million (Sh1.5 billion) per year from charcoal traffic in Somaliaâ€™s Badhadhe District,â€ says the Unep/Interpol report, adding that trading in charcoal and taxing the ports have generated an estimated annual total of $38 million to $56 million for Al-Shabaab.

Earnings from the trade are vital in sustaining the terroristsâ€™ capacity to carry out attacks in Somalia and Kenya, Christian Hellemann, the principal analyst for the Unep/Interpol report, said in an interview with the Nation last month.

He likened charcoal smuggling from Somalia and other African countries to the drug wars in Mexico in terms of violence and amounts of money involved.

Although charcoal is the primary cooking fuel in Somalia, it is also highly prized in the Gulf states for its quality. Made largely from the wood of acacia trees, it is slow burning and aromatic, imparting a sweet aroma to the regionâ€™s grilled meats.

According to IDA, Somaliaâ€™s charcoal exports to the Gulf have long been carried by a fleet of dhows and small freighters plying the route between Kismayu and Barawe in southern Somalia and ports in the Gulf region such as Khasab, Oman, and Sharjah, United Arab Emirates. The ships often arrive in the Somali ports loaded with sugar, which is exchanged for the charcoal.

In Nairobi, Cord Deputy Minority Leader Jakoyo Midiwo this week charged in Parliament that KDF personnel were illicitly trading in charcoal in Somalia.

â€œWe did not send our boys to Kismayu to collect taxes. They are selling charcoal there. Bring our boys back home,â€ Mr Midiwo said on the floor of the National Assembly on Thursday during a heated debate.

Contacted by the Sunday Nation later, Mr Midiwo claimed that KDF had â€œtaken overâ€ charcoal business in Kismayu after taking the area from the militants in 2012.

He challenged the Somali government to state who was benefiting from taxes being levied in regions controlled by the KDF.

â€œWhen citizens of Somalia come to realise what our soldiers are doing on their soil, they are bound to retaliate. When this happens, it is the ordinary Kenyan who will suffer like what we have seen recently in terror attacks,â€ said Mr Midiwo.

The Opposition Cord has been demanding the withdrawal of Kenyan troops from Somalia following increased attacks in Nairobi and Mombasa, but the ruling Jubilee alliance has dismissed the calls.
Last year, the UN Security Council published a report prepared by monitors charging that the illicit trade in charcoal facilitated by Kenyan troops in Somalia was producing significant revenue for the Al-Shabaab.

Working in cooperation with Sheikh Ahmed Mohamed Islam â€œMadobeâ€ and his Ras Kamboni militia, the KDF was alleged to have helped export about one million sacks of charcoal a month, according to last yearâ€™s report prepared by the UN Monitoring Group for Somali and Eriteria.

According to the report, when KDF troops and the Ras Kamboni militia entered the port of Kismayu in southern Somalia on September 28, 2012, they found some four million sacks of charcoal worth at least $60 million (Sh5.3 billion). Comparable stockpiles existed in other Somali ports, including the Al-Shabaab-controlled port of Barawe. Kenya and the AU unsuccessfully petitioned the UN Security Council to temporarily lift the ban to allow a one-time export of the stockpiles.

But the report claims that when the Security Council declined, KDF and Ras Kamboni â€œtook the unilateral decision to begin the export of charcoalâ€, said the UN report, whose findings have now been repeated.

By Mugumo Munene for the Nation