Holmes, a 27-year-old former grad student, received one life term for each person he killed, plus 3,318 years for the attempted murders of those he wounded and for rigging his apartment with explosives. He is not eligible for parole.

“It is the court’s intention that the defendant never set foot in free society again,” Judge Carlos A. Samour Jr. said after imposing the sentence Wednesday. “If there was ever a case that warranted a maximum sentence, this is the case. The defendant does not deserve any sympathy.

“Sheriff, get the defendant out of my courtroom please.”

There was a smattering of applause as Holmes, shackled at the waist and wearing red prison garb, was led away from the courtroom where he has spent most of his days since jury selection began in January.

Prosecutor George Brauchler said he believed the sentence was the fourth longest in U.S. history. He described the judge’s command to promptly remove Holmes from the courtroom as “the right exclamation point” to bring a painful, difficult trial to a close.

Â Wearing a helmet, gas mask and ballistic gear, Holmes tossed tear gas into Theater 9 of the Century 16 megaplex in Aurora during the first minutes of the midnight show of “The Dark Knight Rises.” Armed with a shotgun, a rifle and a pistol, he opened fire on July 20, 2012; he had more than 700 rounds of ammunition with him. After his gun jammed, Holmes walked out of the theater and surrendered.

The trial featured graphic descriptions of the gruesome crime scene and heartbreaking stories of the lives taken and shattered by Holmes’ bullets.

The testimony also focused on Holmes’ mental illness. A notebook containing his rambling thoughts and detailed plans for the massacre, as well as hours of videotaped interviews with a court-appointed psychiatrist, dominated that part of the testimony.

Holmes revealed that he had been obsessed with killing people since his early teens. He said he studied neuroscience in part to fix his own “broken brain.” He also said he contemplated suicide before devising a “life capital” plan that awarded him points for each life he took.

The defense portrayed Holmes as a victim of mental illness and brought forward a parade of witnesses who knew him as a sweet, academically gifted child. But prosecutors disdainfully portrayed him as a self-absorbed loser who lashed out violently after setbacks in his love life and his studies.

In the end, the judge found him to be a quitter who gave up on life and vowed to take others with him.

Â A jury rejected Holmes’ insanity defense and convicted July 16 him of 24 counts of murder, 140 counts of attempted murder and a single explosives charge. But the jury could not agree on the death penalty; there was a lone holdout.

More than 100 shooting survivors and friends and relatives of the people he killed offeredheartbreaking testimony about their loss at the formal sentencing hearing, which began on Monday. Some called Holmes a monster and said he had cheated the executioner.

They spoke of holidays, weddings and graduations that won’t be celebrated, and about depression, night terrors and survivor’s guilt. Some have yet to set foot in a movie theater.

Holmes’ mother, Arlene, apologized to the victims — but he remained silent. She said he is remorseful as well, but his schizophrenia and the medication he takes make it difficult for him to express his feelings.

His defense attorneys have said they will not appeal Holmes’ convictions or the sentence, noting that Holmes offered early on to plead guilty if prosecutors took the death penalty off the table.

Before issuing the formal sentence, Samour defended the criminal justice system, saying it worked even if some people were not happy that Holmes didn’t receive the death penalty.

He said he understands why some survivors are disappointed and noted that the lone holdout juror showed more compassion toward Holmes than the defendant ever showed his victims.

He assured them it was not. He pointed out that the mandatory life sentences, and the decision not to appeal, means the case ends now and the victims can finally move on with their lives. Had Holmes gotten a death sentence, the case would have dragged on, possibly for decades.

“Either way you look at it, the defendant is going to die in the custody of a department of corrections,” Samour said. “Death is certain, the only question is when.” 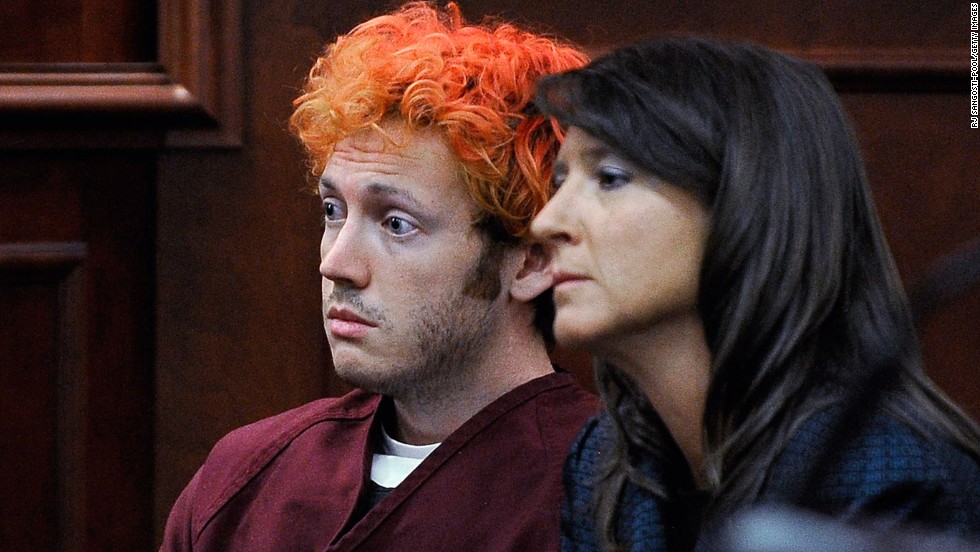 The public gets its first glimpse of James Holmes, then 24, the suspect in the Colorado theater shooting during his initial court appearance July 23, 2012. With his hair dyed reddish-orange, Holmes, here with public defender Tamara Brady, showed little emotion. He is accused of opening fire in a movie theater July 20, 2012, in Aurora, Colorado, killing 12 people and wounding 70. Holmes faces 166 counts, almost all alleging murder or attempted murder. He has pleaded not guilty by reason of insanity.

He rejected criticism that the trial was a waste of time and money, since Holmes would have ended up with the same sentence had the state agreed to drop the death penalty in exchange for a guilty plea.

“Since when do we as a nation, as a community, put money ahead of everything else? When did that happen?” the judge asked.

‘He robbed the world’

Samour said the trial provided a platform for the community to know the people who were lost, and to learn about how such horrific, violent acts affect hundreds if not thousands of people. He said we were able to learn about the issue of mental illness and that we are still far from any real understanding about it. He said even the experts who testified would agree that the field of psychiatry has a long way to go.

Samour also noted that there was a fork in the road at which Holmes could have turned back, but didn’t. That was when he was outside the theater and tried to call his therapist.