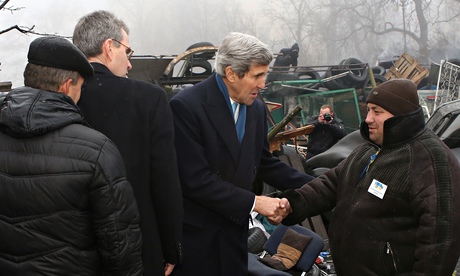 John Kerry visits the Shrine of the Fallen in Independence Square, Kiev, on Tuesday. Photograph: Sipa USA/Rex
By Agencies for the Gurdian

The US and Russia are to hold talks on easing east-west tensions over Ukraine as the west steps up efforts to persuade Moscow to pull its forces back to base in Crimea and avert the risk of a war.

The US secretary of state, John Kerry, and the Russian foreign minister, Sergei Lavrov, will meet face-to-face for the first time since the crisis escalated, after a conference in Paris attended by all five permanent members of the UN security council.

Nato and Russia will hold parallel talks in Brussels amid concerns that a standoff between Russian and Ukrainian soldiers in Crimea could still spark violence, or that Moscow could also intervene in Russian-speaking eastern Ukraine.

The French foreign minister, Laurent Fabius, said European Union leaders meeting in Brussels on Thursday could decide on sanctions against Russia if there is no “de-escalation” by then.

“We’re working on it,” Fabius told the BFM television network ahead of a meeting with his Ukrainian counterpart. “There is no military solution.”

In Donetsk -â€“ the home of deposed president Viktor Yanukovych and a flashpoint of tensions between pro-Russian and nationalist Ukrainians in eastern Ukraine â€“ Ukrainian police seized the city’s government headquarters from pro-Russian demonstrators who had occupied it. On Wednesday morning, the Ukrainian flag was raised above the building, replacing the Russian flag that had flown there since Saturday, when protests had erupted following the announcement by the Russian president, Vladimir Putin, that he had the right to invade.

Protesters led by a man who declared himself “people’s governor” had been barricaded in the regional administration building demanding relations with Kiev be severed and control of the security forces placed in their hands.

A police statement said the evacuation began after reports the building had been booby-trapped with explosives.

Putin on Tuesday defended Russia’s actions in Crimea, a strategic Black Sea peninsula that is part of Ukraine but used to be Russian territory, and said he would use force only as a last resort.

His comments eased market fears of a war over the former Soviet republic. But Russian forces remain in control of the region and Putin gave no sign of pulling servicemen â€“ based in Crimea as part of the Black Sea fleet â€“ back to base.

“What he wants above all is a new empire, like the USSR but called Russia,” former Ukrainian president Viktor Yushchenko told France’s Europe 1 radio.

In Washington, Barack Obama acknowledged that Russia had legitimate interests in Ukraine but said that did not give Putin the right to intervene militarily.

A senior US administration official said Obama spoke to the German chancellor Angela Merkel on Tuesday and discussed a potential resolution to the crisis. The Russian-speaking German leader has good relations with the German-speaking Putin, and Berlin is Russia’s biggest economic partner.

The official said Obama, in his phone call with Putin last Saturday, had discussed what officials called an “off-ramp” to the crisis in which Russia would pull its forces in Crimea back to their bases and allow international monitors to ensure that the rights of ethnic Russians are protected.

The US president will stay away from a G8 summit scheduled for Sochi, Russia, in June unless there is a Russian reversal in the Ukraine crisis, the official added.

At his first news conference since the crisis began, Putin said on Tuesday that Russia reserved the right to use all options to protect compatriots who were living in “terror” in Ukraine but that force was not needed for now.

His comments, coupled with the end of Russian war games near Ukraine’s borders, lifted Russian bonds and stock markets around the world after a panic selloff on Monday.

In comments ridiculed by US officials, Putin denied Russian armed forces were directly engaged in the bloodless seizure of Crimea, claiming that the uniformed troops without national insignia were “local self-defence forces”.

The French president, FranÃ§cois Hollande, became the latest western leader to raise the possibility of sanctions if Putin did not step back and accept mediation. He set out a tougher public line than Merkel, who has avoided talk of sanctions so far.

“The role of France alongside Europe â€¦ is to exert all necessary pressure, including a possible imposition of sanctions, to push for dialogue and seek a political solution to this crisis,” Hollande told an annual dinner of France’s Jewish community leaders late on Tuesday.

Putin earlier said western sanctions under consideration against Russia would be counter-productive. A senior US official said Washington was ready to impose them in days rather than weeks.

The Canadian prime minister, Stephen Harper, said after speaking to Obama at the weekend that the G7 group of leading industrialised nations were considering meeting in the near future, a move that would pointedly exclude Russia. The G7 became the G8 in 1998 when Russia was formally included.

Kerry, on his first visit to Kiev since the overthrow of Russian-backed president Viktor Yanukovych, accused Moscow of seeking a pretext to invade more of the country. He said the US was not seeking a confrontation and would prefer to see the situation managed through international institutions such as the Organisation for Security and Cooperation in Europe (OSCE).

Yanukovych was expected to meet Lavrov, Hollande and the British foreign secretary, William Hague, on the sidelines of a Paris conference on Lebanon, before holding private talks with the Russian minister later in the day in the French capital.

Ukraine’s acting foreign minister, Andriy Deshchitsia, was also in Paris for talks with French officials and Kerry. It was not clear if he too would meet Lavrov.

No major incidents were reported in Crimea overnight. But in a sign of the fragility of the situation, a Russian soldier on Tuesday fired three volleys of shots over the heads of unarmed Ukrainian servicemen who marched bearing the Ukrainian flag towards their aircraft at a military airfield surrounded by Russian troops at Belbek, near Sevastopol.

After a standoff in which the two commanders shouted at each other and Russian soldiers levelled rifles and rocket-propelled grenade launchers at the Ukrainians, the incident was defused and the Ukrainians eventually dispersed. No one was hurt.