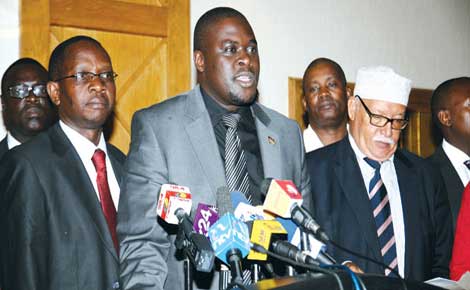 The National Alliance ( TNA) members in Western and Nyanza regions have accused President Uhuru Kenyatta of abandoning them after assuming power in 2013. The group that consists of candidates who contested for gubernatorial and parliamentary seats on the TNA ticket in last year’s General Election said the President has abandoned them.

Speaking in a Kisumu hotel, the members said they feel aggrieved for using their resources to popularise TNA and the Jubilee coalition in the areas but they have nothing to show for their sweat. They accuse the ruling coalition of neglecting them immediately the President and his Deputy assumed power and say the two leaders are now working with those who were never party members. “We are not amused that the President left us on our own immediately we helped him get power.

When he is appointing people, we feature nowhere nor are we consulted,” said Ambeyi Ligabo, who contested the Shinyalu parliamentary seat. The former UN Special Rapporteur for Freedom of Expression noted that it was difficult selling the Jubilee coalition in the region that overwhelmingly voted for the Coalition for Reforms and Democracy ( CORD).

“Some of us were branded traitors to our communities but we soldiered on selling Jubilee ideals by using our money. Today, the President now consults church leaders and those who did not support him on matters that affect our region,” Mr Ligabo said. Meshack Okello, who competed with Ababu Namwamba for the Budalangi parliamentary seat echoed Ligabo’s sentiments, saying that the coalition risks losing ground in the region. “Even the agents who sacrificed their time and energy to ensure that our votes are safe have never been paid, two years down the line. We are considering quitting Jubilee and support CORD,” Mr Okello said.

He vowed to mobilise the voters in Budalangi and Western to back CORD’s call for referendum. “We have realised we were just used as stepping stones but we have learnt our lesson. We better work with the opposition to address the problems affecting our nation,” Mr Okello said. Gabriel Obasie, a TNA aspirant for the Teso North parliamentary seat in the 2013 elections, urged the Jubilee leaders to amend the cracks within the party rank and file if they want to be re-elected in 2017.

“We have read that some leaders have been tasked with countering the push for referendum in Western but none of us has been approached. It is illogical to bring a foreigner here to talk to us when we have been with the coalition all this time,” Mr Obasie said.

Leonard Musehenga, who was the TNA’s candidate for the Mumias East parliamentary seat claimed Jubilee will sink into oblivion if it does not recognise the role played by its regional leaders. “We have tried even to seek audience with the President and his Deputy to no avail. We are waiting to see if they will have time for us in 2017 to support their re-election bid,” Mr Musehenga said.

TNA Secretary General Onyango Oloo called on the leaders to be patient as their issues will be addressed. “The Jubilee Coalition has unveiled its National Democratic Strategic (NDS) Plan to highlight positive issues of development and address issues of youths and local party leaders,” Mr Onyango said.

United Republican Party (URP)’s Organising Secretary George Ayugi said the Jubilee coalition encouraged the youth in the opposition dominated region to work together with the government for economic empowerment. “President Kenyatta recognises that all tribes and youths in this country are important. Let us work together to enable the government deliver on its promises,” Mr Ayugi said.