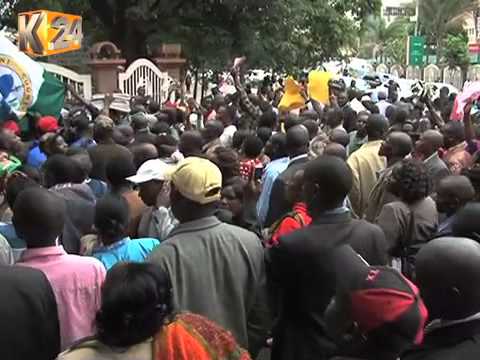 Activists mostly Jubilee supporters are on Tuesday morning set to hold a protest dubbed Occupy Harambee Avenue against the manner in which the government is handling security issues.

The protest follows the killing of 28 passengers on a bus heading to Nairobi from Mandera on Saturday morning by al Shabaab militants.

Demonstrators will petition President Uhuru Kenyatta to fulfill every promise made about security after the September 2013 Westgate mall attack in which more than 60 people were killed, also by the al Shabbab, a petition released through activist and photographer Boniface Mwangi states.

The organisers of the protest mostly drawn from the Jubilee social media soldiers are also demanding that KDF soldiers deployed to insecurity hot spots in the recent past be retracted, saying the deployment was without government approval.

They further want all security chiefs, including Interior CS Joseph Ole Lenku, to account for falling to deliver their mandates, and the government to create a fully unified police service.

â€œAll allegations of misconduct by security agents, for example as identified by IPOA and reported in Operation Usalama Watch, must be properly investigated and culprits punished,â€ their petition also reads.

Demonstrators are expected to gather at Harambee Avenue at 10am for the protest.