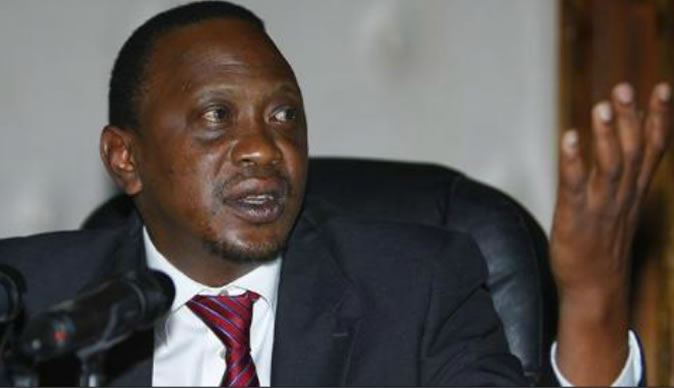 Kenya is fast degenerating into a theatre of of the absurd, thanks to poor leadership, and Uhuruâ€™s gross failures. The top 2 seem focused on winning their cases at The Hague than helping Kenyans attain double digit growth. Already, just four months in power, the nation has slid back to the bottom pool as the 4th most corrupt nation on earth. Uhuru takes responsibility for this.

And 100 days since inauguration day, we are yet to know Kenyatta wanted to be President. Hospitals still donâ€™t have medicine, teachers are on strike, which means he found kids in school when he took power, and now they are at home, some drinking Muratina, and others watching TV, while his own school Peponi where he serves the rich kids is in session or some Summer Break of sorts.

I hear at Peponi, teachers are paid Shs400, 000 ($5000) a month and in dollars. The only raise he offered teachers is Sh800, a meager $10. Offering teachers $10 while his own teachers at Peponi- foreigners from Europe and America of course whom he thinks should have dignity are earning 500 times more than that- what a teacher in their countries canâ€™t even earn. What a shame!

Parliament shopping in China, MPs salaries, Ruto’s jet/house corruption 100 millions etc are all meant to divert our attention to the wrong places, and ignore the real culprit- the epicenter of it all- Uhuru Muigai Kenyatta.

After all parliament is led by his confidante Justin Muturi while Ruto, the man whose corruption scandals are being leaked is his Deputy in a coalition that brought together 2 of Kenya’s largest tribal groupings.

And the logic is simple, create an impression that “Ruto is bad, Parliament is corrupt, am the good one, Kenyans, am the only one who can save you from these vultures”. Creating a crisis and then acting like you are above it- and actually condemning it but without ending it. That is turning out to be Uhuruâ€™s legacy.

Harry Truman was responsible enough to say- the buck stops here! Kenya’s Left has to keep its eyes on the “real ball”. And that is where the buck stops. An address on State House Road.

If Uhuru was serious about stopping these China trips, he can just text or email his sidekick Muturi and that would be it. But he wonâ€™t, coz they are in this together. Itâ€™s part of their broader strategy. They want demos on Parliament Rd, not State House Rd.

If Uhuru was serious about stopping Rutoâ€™s mega-scandals before they happen, he would just tell him, â€œhey Deputy, you are letting me down, this nonsense has to stop!â€ But he wonâ€™t, TNA spin masters, not only leak Rutoâ€™s scandals, but also pretend the President is far removed from it. Kenyans donâ€™t be stupid.

Here is the axis of evil. UHURU tops the list, followed by RUTO, then DUALLE/JUSTIN MUTURI only because they are collaborators in Uhuruâ€™s grand scheme.

And folks donâ€™t forget, Muturi and Dualle are the President and Deputy President in waiting in case Ruto and Uhuru are jailed, as is widely expected and predicted around the world. Uhuru and Ruto would be the first sitting leaders to be jailed by ICC.

Credit Rating agency Moodyâ€™s analytics is already in the process of downgrading Kenya in view of its leadership failures and unpredictability as to whether Uhuru and Ruto would be jailed.

That means cost of doing business will go up, as interest rates skyrocket and with it the economy would tumble. And the consequences narratives prophesy would have gone full circle as predicted by Rashid Wanjala, Koffi Annan and Makau Mutua. And Uhuru takes responsibility for this. So sad.