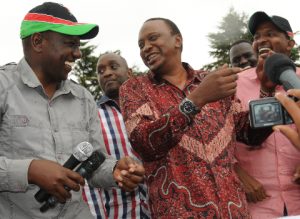 Civil society activists have withdrawn a suit they filed at the high court challenging the suitability and eligibility of Gatundu MP Uhuru Kenyatta and his Eldoret North counterpart William Ruto to contest for the presidency.

The activists told a three-judge bench today (Thursday) that the issue of integrity could not be addressed fully if other presidential aspirants were not part of the lawsuit, they however promised to file “the mother of all petitions” that will encompass all politicians eyeing the presidency.

The group said the move was purely tactical geared at addressing the issue of integrity once and for all.

Justices Isaac Lenaola, Mohammed Warsame and Lady Justice Philomena Mwilu allowed the petitioners to withdraw the case on the basis that it was their constitutional right to do so. At the same time the judges ruled that it was also within the activists’ right to bring another petition before the court.

Mr Kenyatta and Mr Ruto are set to sign a pre election pact this Sunday that enjoins them to contest the presidency on a joint ticket amid abrewing rebellion in Ruto’s home turf with youths rallying behind ACHICHA movement to try and stop the duo.

The two together with radio journalist Joshua arap Sang and former head of civil service ambassador Muthaura are facing charges of crimes against humanity at the International Criminal Court arising out of the 2007/2008 post election violence.

The post election violence is blamed for the deaths of more than 1200 people, destruction of property worth millions and displacement of close to 700,000 persons some of who still reside in IDP camps five years later.

The ICC trials will start in April 2013 and will require the two to be physically present at the court throughout the trial period.