When it started work in Kenya, it delivered to power the most unlikely political alliance in the history of independent Kenya. Few believed that just five years after butchering each other, the kikuyu and kalenjin ethnic masses would form a solid bloc vote and cast their millions to candidate Uhuru (and Ruto) in 2013.

It took money, a lot of money, but it also took ingenuity – a blatant reengineering of human experiences, some as sad and ugly as rape, forceful evictions and displacements, murder and the burning alive of refuge seekers in the church of God.

The propaganda machine first started out by hiding the real faces behind it. Uhuru’s new party TNA – though in existence as a briefcase party for several years before its launch – was filled by new faces and new colours, eventually settling on the ‘loved christian bird’, the dove, as its symbol.

To a citizenry that never ‘researches’, TNA was ‘new’, so was Onyango Oloo and Johnson Sakaja, the public faces of it.

Who were the faces in the shadows? The real spin doctors? No one bothered.

The media, feigning ignorance, dig so shallow and so late that by the time it was ‘revealed’ that Uhuru had hired a British Public Relations firm -BTP Advisers – he was no longer ‘former deputy prime minister’ but ‘president elect’.

Why was hiding BTP Advisers – British nationals – necessary? Uhuru’s campaign narrative was that his main rivals in CORD were pandering to neocolonialists.

He claimed the country’s sovereignty, if put under his rivals rule, would be akin to resigning to the British and the Americans via their local puppets, especially CORD Leader Raila Odinga.

Had it been realized, openly, that he had filled his campaign team with ‘foreigners’, especially Britons, the same people he riled and insulted/chided each day on the campaign trail, his message would have been challenged vigorously – this did not happen.

So, in the background, Uhuru was consuming western generated campaign propaganda that turned the population, especially his ethnic kikuyu and his deputy’s community the kalenjins, against ‘neocolonialists and their local sympathizers’. It borrowed from a distant past, opened old colonial wounds, fed into new cross and inter-ethnic feelings of persecution and counter-persecutions, used the church and the owners of production, used fear, used money and used age to rise to power.

There were no ideologies, just grievances.

The propaganda machine was not just tested at the 2013 presidential elections. In the by election following the death of internal security minister George Saitoti, the team had ‘proved’ that their ‘magic’ would work.

Ed Staite, the man who led Uhuru team, would reveal, ”â€œI am happy to say I have provided media and skills training to The National Alliance Party in Kenya during this year. I believe they can be a really positive force in the forthcoming General Election as they are backed by religious and tribal leaders from right across Kenya in a way never seen beforeâ€.

Religious and tribal leaders? Yes. Religion, especially Christianity, played a key role in the 2013 elections. It urged for peace, warned against violence and told those who would ‘lose’ the elections – regardless of the manner of loss – to accept the verdict. In fact, even as CORD leader Raila Odinga indicated he would challenge the results in a court of law, the religious and ‘business community’ spiritedly urged him to ‘accept and move on’.

The tribal leaders too did their ‘endorsement’ bids. Kalenjin elders, for instance, were flown from the Rift Valley and booked in Mombasa for several days ‘discussing’ Uhuru-Ruto alliance. Later, at Eldoret Sports Club, joined by Kikuyu elders in the rift valley and church leaders, they unanimously endorsed the duo for ‘ the sake of peace and reconciliation’.

Uhuru retained BTP Advisers. In his two years in power, even as the gap between campaign pledges before election and delivery of services after election widens, the President’s propaganda machine has fed the nation hot-air, consistently pulling public stunts and choreographed political shows which have served to entertain citizens as nothing substantive goes on around his government – one of the most incompetent and corrupt Â regimes in post-independent Kenya.

But, is this meticulous propaganda machine going down? The last one week the Statehouse Propaganda juggernaut has been run-over like Kibaki’s 2007 presidential campaign.

It is now rumoured in corridors of power that the president’s PR team, especially the so called ‘local chapter’, the folks Ed Staite and his other British spin doctors trained, is embroiled in tussle for control of the billions of shillings at its disposal.

Critics accuse Uhuru’s regime of putting a price tag on every journalist, every media house and every major blogger in the social media sphere. Those politicians and bloggers they can’t ‘buy’ they hurl to court with various charges. For the journalists, those too big for their manipulation increasingly find the newsroom inhabitable. Many of these folks are leaving the media in droves.

On social media alone, PSCU is accused of infiltrating Facebook and twitter with hirelings whose role is to insult opposition leaders and opposition leaning bloggers and pundits. The clique of online ‘fire fighters’, mostly mid-level college students and fresh jobless graduates spare no time to hit out at those seen as regime detractors.

This online infiltration has been at the core of jubilee propaganda. Â Undercover journalists recorded the head of Uhuru media campaign machinery, Ed Staite,Â Â claiming they could â€œneutraliseâ€ negative Wikipedia entries for international clients. For Uhuru, who was and still is facing crimes against humanity, the serious charges of crimes against humanity on him, including mass murder, rape, etc, have all but been forgotten. Neutralisation worked!

Going forward, however, the local chapter of Uhuru propaganda machine is falling apart very fast. First, the online brigade which went ahead to form an entity called ‘jubilee social media cabinet’ is embroiled in supremacy wars, with each wanting to prove he is more hard-working than the other.

This team, led by state house based blogger Dennis Itumbi, recently showed its ugly head when they started an onslaught against a TNA elected legislator from Central Kenya on charges of ‘fixing’ president Uhuru. The public slaughter of Hon. Priscillah Nyokabi proved just how how difficult it is getting for people who got used to disparaging CORD Leader Raila Odinga as the chief ”fixer”.

Ever since taking power, the chorus of Uhuru and Ruto being fixed by Raila has seen its glorious days wane, as Ruto lawyer Kharim Khan named key officials then working inside President Mwai Kibaki’s Office – many of whom were retained by Uhuru – as the real culprits.

President Uhuru, on the other hand, have fought viciously for his case not to proceed to hearing, which has the potential to ‘reveal’ the spate of events of the post election violence.

It is also instructive to note that no single narrative of the ‘fixers’ have emerged which puts Uhuru fixers and Ruto fixers as one and the same people. Uhuru fixers, it is widely alleged, were national security agents then working directly under Kibaki, and who gave their testimonies in camera to the Waki Commission which recommended for the prosecution of Uhuru and Ruto, then among 12 other Kenyans, six of whom would be confirmed to face trial at the ICC. Three have since been ‘released’.

Uhuru propaganda machine, deeply divided, with accusations that it is excluding those ‘bloggers’ seen to be more closer to Deputy President William Ruto than Uhuru, have seen a breakdown of the jubilee social media cabinet, with the outfit remaining for Kikuyu youths mostly, assisted with opportunistic others here and there. Kalenjins have since left the outfit in droves.

The simmering bone of contention is that TNA bloggers are ‘favoured’ than their URP counterparts. That’s so as the leader of URP, Deputy President William Ruto, is said to have openly lashed out at elements within PSCU, telling them he has no need for ‘propaganda’ and can create his own, if he wants one.

With the retreating URP wing in jubilee propaganda arrangement, the TNA wing have increased their cannibalism on each other. TNA wing is also furious and dismissive of attempts by ‘outsiders’ like Ngunjiri Wambugu – who supported Hague trials of Uhuru – to join their team.

The tension among Uhuru’s propaganda team even led to a well known mainstream media columnist – also part of the Jubilee propaganda syndicate – to use his column to call for order and warn against ‘public lynching’ of the embattled Nyeri Women Rep Priscillah Nyokabi. Nyokabi is claimed to have fixed Uhuru single handedly.

To get an idea of how fierce this war is, CLICK the listed screen shots below. You will be surprised. See how Ngunjiri, Itumbi, Matsanga and other tore into each other. 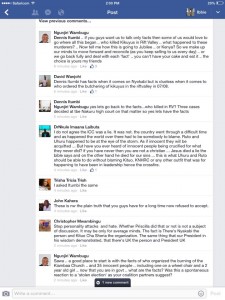 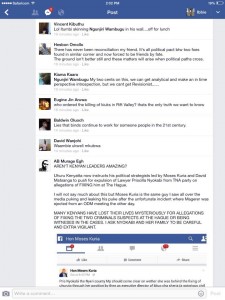 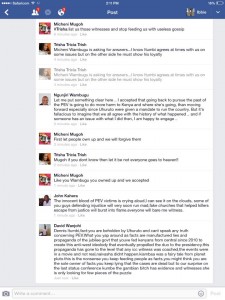 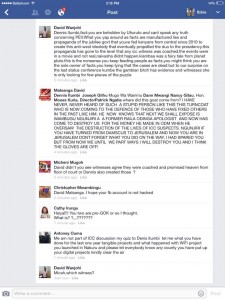 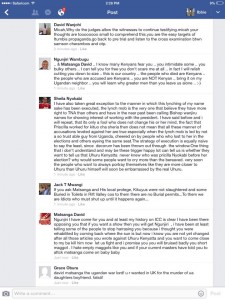 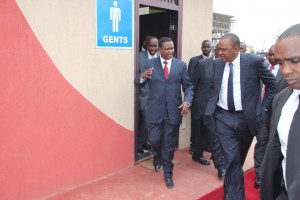