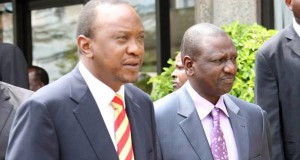 Statement on Remarks by Kalonzo Musyoka

The National Alliance (TNA) has noted with concern statements made by the leader of the Wiper Democratic Party, Mr. Kalonzo Musyoka, in which he ludicrously blamed TNA for the fact that Ms. Diana Kethi Kilonzoâ€™s name cannot be found in the National Voters Register. Kalonzo Musyokaâ€™s wild allegations yesterday are cheap as an analogue politician struggling to revive a dead political career can get.
Mr. Musyoka made the preposterous claim that â€œTNA is IEBC and IEBC is TNA. TNA must have tampered with the voter register, hence deleting Kethiâ€™s nameâ€.
The party Legal team is studying video and audio -tapes of the Press Conference held at Serena and will be seeking relevant redress so as to ensure Politicians are held to account on what they claim and allege in Public.
We will issue further communication once the Legal team finalizes its analysis on the remarks.
This patently false and defamatory statement is so absurd that it raises serious questions as to the management of the Wiper Democratic Party and its approach to politics.
On 20th February, 2013 the IEBC made available for public perusal the National Voters Register to all political parties. Additionally, tens of thousands of Kenyans downloaded the Register from the IEBC Website.
Not a single person has come forward to say that they have a register; whether hardcopy or softcopy, that has Ms. Kilonzo in it. The Media, bloggers, political NGOs, private citizens and our political competitors have all conceded this basic truth. Wiper is attempting to blame TNA as part of a desperate ploy to hoodwink Kenyans and cover up the electoral fraud that it attempted with regard to the Makueni Senatorial By-Election.
At his press conference Mr. Musyoka proceeded to wonder how it is that TNA came to know that Ms. Kilonzo was not on the register. Well, Mr. Musyoka, the answer is simple. TNA is a professionally run political party; staffed by competent, enthusiastic young persons who are knowledgeable on the Law.

To serve in a political office is one of the highest callings a citizen can aspire to, whether County Representative, Governor, Member of Parliament or President; Honesty, Integrity and an Unwavering Devotion to Upholding the Constitution and the Rule of Law are essential requirements and the heart and core of any call to political office.
We at TNA have systems in place to ensure that all our candidates are eligible to contest at Elections. Our position is informed by the Law, which at Regulation 13(1) of the Elections (General) Regulations, 2012 states as follows:

13. (1) A political party that intends to nominate a candidate for an elective post under the Act shall observe the provisions of the Constitution, the Act and any other written law in respect of the qualifications and disqualifications for that office.

Further, Regulation 38(a) of the Elections (General) Regulations, 2012 states as follows:

38. A nomination paper submitted by a political party candidate to the Commission shallâ€”
(a) contain the candidateâ€™s name as it appears in the register of voters;

Clearly, the Wiper Democratic Party does not have any structures or systems in place to vet its own candidates as required not only by the Law but also by commonsense. Had Wiper simply checked the eligibility of its favoured candidate it would have very early on realized that she was not a registered voter and this entire fiasco would never have arisen.
In addition to scrutinizing our own candidates, we at TNA also check on the eligibility of the candidates of our competitors. It is the accepted practice internationally for professionally run political parties to investigate the eligibility of the proposed candidates of their competitor parties. For example, in the United States of America, the Republican Party made a concerted effort to investigate whether Barrack Obama satisfies the Constitutional requirement that a US President must be a â€˜natural born citizenâ€™. The Republican Party investigated his birth notification records to ensure that he was indeed born in the mainland USA. Once it was satisfied that he was eligible to hold office, they dropped the issue.
Similarly, TNA actively scrutinizes the candidates of other Parties to ensure that they are indeed eligible to run for election or to be nominated. Where we find that this is not the case we immediately notify the relevant authorities, as we did in the case of Ms. Kilonzo. It should be noted that TNA also successfully raised objections regarding the eligibility of some candidates who sought to vie for certain positions during the last General Election, including one who sought to be Governor of Nairobi but did not have the requisite academic qualification, despite her protests to the contrary.
We are loathe to give advice to our political competitors but in this case we shall make an exception. Our advice to Mr. Musyoka is that Wiper Democratic Party is in urgent need of an overhaul. Mr. Musyoka and Company must take measures to transform it from the basket-case briefcase outfit that it is at present into a modern and vibrant institution complete with proper structures, competent and technically proficient staff and professional leadership independent of the influence and control of mischievous politicians. Wiper Democratic Party cannot continue being so run-down that it cannot perform a simple task such as vetting its own candidates to ensure they are duly registered voters. It is not good for the growth and development of politics in Kenya that one of the leading political parties in the Country is so utterly devoid of leadership, competence or professionalism.
Soon, qualifying political parties will receive monies from the Political Parties Fund. We urge Wiper to utilize their share of the same towards the urgent task of putting their house in order.
By Jasper Mbiuki