The African Union has urged the International Criminal Court (ICC) to defer cases against sitting leaders until they leave office.

The current presidents of Kenya and Sudan both face ICC trials, and African leaders have long complained that the court unfairly targets them.

The AU meeting in Ethiopia had discussed withdrawing from the ICC, but the idea failed to gain support.

Senior figures including Kofi Annan have criticised plans to quit the ICC.

Ethiopian Foreign Minister Tedros Adhanom Ghebreyesus told journalists: “Sitting heads of state and government should not be prosecuted while in office. 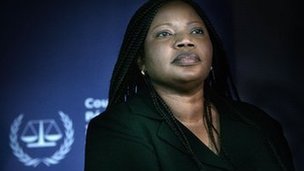 “We have resolved to speak with one voice to make sure that our concerns are heard loud and clear.”

The AU summit in Addis Ababa is expected to formally adopt the request later.

The Ethiopian foreign minister said the AU would ask for the trials of Kenyan President Uhuru Kenyatta and Sudan’s Omar al-Bashir to be deferred.

He also said the AU would ask for a deferral of the trial of Mr Kenyatta’s deputy, William Ruto.

Both Kenyan leaders deny charges of organising violence after the 2007 election.

The ICC issued a warrant in 2009 for Mr Bashir over alleged war crimes in the Darfur region, but he has not yet been arrested.

The ICC relies on the authorities of national governments to hand over suspects, but Mr Bashir has avoided arrest despite travelling to countries that have signed up to the ICC statute.

Mr Tedros, who is the current chairman of the AU’s Executive Council, said the ICC was “condescending” towards the continent.

“The court has transformed itself into a political instrument targeting Africa and Africans. This unfair and unjust treatment is totally unacceptable,” he said.

He said that the ICC had failed to respond to the African Union’s previous complaints and said the issue should be referred to the UN Security Council.

Thirty-four of the AU’s 54 members have signed up to the ICC.

Kenya’s parliament has already passed a motion for the country to withdraw.

Former UN Secretary-General Kofi Annan has said that withdrawing from the court would be a “badge of shame”.

“Those leaders seeking to skirt the court are effectively looking for a license to kill, maim and oppress their own people without consequence,” he wrote in an article carried by several newspapers.

“They simply vilify the institution as racist and unjust, as Hermann Goering and his fellow Nazi defendants vilified the Nuremberg tribunals following World War II.”

All eight of the cases currently open at the ICC are in Africa but it is also investigating possible cases elsewhere.