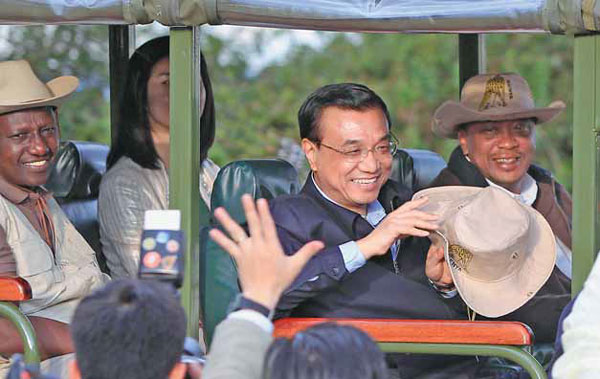 By AFP
One of Africa’s largest elephants has died after being shot by poachers using poisoned arrows in Kenya, wildlife officials revealed as they mourned on Saturday the loss of an “old friend.” The elephant famed for his giant tusks, known as Satao and aged around 45, was wounded by poisoned arrows in May in Kenya’s vast southeastern Tsavo national park.

The Tsavo Trust, which works to protect the wilderness and its animals, announced the death “with great sadness” for one of the “most iconic and well-loved tuskers.” The death of the elephant, the latest in a surge of the giant mammals killed by poachers for their ivory, came a day after wildlife regulator CITES warned entire elephant populations are dying out in many African countries due to poaching on a massive scale.

“It is with enormous regret that we confirm there is no doubt that Satao is dead, killed by an ivory poacherâ€™s poisoned arrow to feed the seemingly insatiable demand for ivory in far off countries, a great life lost so that someone far away can have a trinket on their mantlepiece,” Tsavo Trust said in a statement released late Friday. “Rest in peace, Old Friend, you will be missed,” it added.

Poachers had hacked off the elephant’s face and stolen the tusks, but conservationists who had followed Satao for years identified the body from the ears and other signs. The carcass was found earlier this month.

Official figures doubted More than 20,000 African elephants were poached last year alone for their tusks, which rake in thousands of dollars a kilo in Asia, according to the Convention on International Trade in Endangered Species of Wild Fauna and Flora (CITES).

Organised crime syndicates and rebel militia looking for ways to fund insurgencies in Africa have become increasingly involved, eager to reap the benefits as demand in China for ivory to use in decorations and in traditional medicines has fuelled a multi-billion-dollar illicit trade.

The famed elephant lived in a vast wilderness stretching over a thousand square kilometres (400 square miles), a major challenge for rangers from the government-run Kenya Wildlife Service (KWS) to patrol. “Understaffed and with inadequate resources given the scale of the challenge, KWS ground units have a massive uphill struggle to protect wildlife,” the Tsavo Trust added. “With todayâ€™s mounting poaching pressures and anti-poaching resources stretched to the limit, it proved impossible to prevent the poachers getting through the net.”

Last month poachers killed an elephant called Mountain Bull on the forested flanks of Mount Kenya, who had gained fame after being fitted with a radio collar tracking its movements. The data was crucial to the opening up of a special wildlife corridor. The carcass was found with spear wounds and the tusks were missing.

While the number of elephants poached in Africa last year is staggering, latest figures show a levelling off after a decade of skyrocketing slaughter. In 2011, some 25,000 of the world’s largest land mammals were killed, and the number was around 22,000 in 2012.

But in Kenya, while official government figures estimate almost 100 elephants have been killed by poachers this year, experts argue the number is far greater. “Nobody in Kenya believes this figure, which suggests that less than one percent of the national elephant population have fallen to poachersâ€™ guns,” Kenyan conservationist Paula Kahumba, who heads the campaign group Wildlife Direct, wrote in a report Friday.

“From the reports I have seen… the elephant poaching in Kenya is at least 10 times the official figures.” Earlier this month over two tonnes of ivory were seized in the Kenyan port of Mombasa, equivalent to at least 114 elephants.