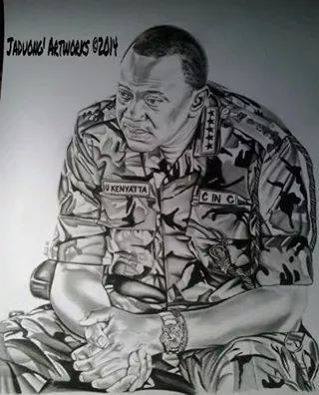 As Kenyans celebrated one Collins Thinktank Okello for his amazing pencil art -drawing portrait of President Uhuru Kenyatta, a leading Jubilee blogger is reported to have led his fellow tribesmen and women to demonize Okello in a bid to block recognition and any monetary value that may accrue from H E the President

The pencil art drawing of a composed president Uhuru went viral and has been trending online for a week now.

Well, Kenyans are unanimous that Uhuru should ignore the jealous supporters and recognize Collins notwithstanding that his second name is Okello from Kisumu, WeAreOne !

Angered by the jealous fools, here is what one great Kenyan- Steve Kewa posted on his wall

”Collins Okello is not a thief, just that fake jealous “lawyer” trying to destroy what collins has put together . Wivu pelekeni kwa mabibi zenu .Mambo ya watoto shuleni sio kielelezo cha maisha ya mtu….bure kabisa….Collins talked with the President on phone and big things are on his way!”

”First it was Mrs Ruto was fake & she shouldnt receive an Honary degree from KU which he calls his university , now it is Collins Okello is a thief and he cant be what Kenyans perceive him to be (latest celeb). Now we kenyans want you bring forward your wife and yourself….all others are fake and you are “original”.Kwani wewe ni nani? wacha kuharibia wengine maisha.” 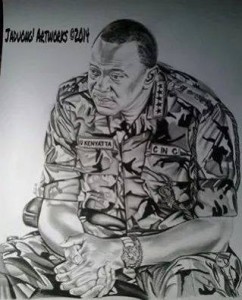