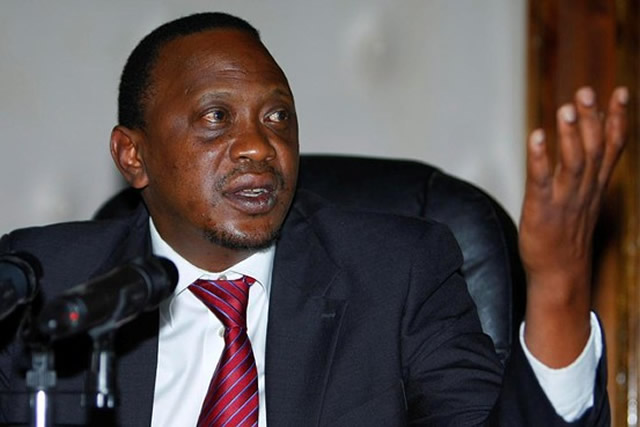 The panic exhibited by Uhuru regime is best explained by the news that China has called a bluff the promises made to Kenya and other African countries for grants and soft loans. The promises were as fake as the Chinese products, poor Uhuru, poor Kenyans, poor Africans!.

Here is the story as reported by AFP international.

Last November, China pledged to give Africa some $1 trillion in aid over the next 12 years.
At the time, a clearly bedazzled Mugabe regime, just re-elected in late July, told itself, its creditors, and its citizens that Zimbabwe would reap a windfall of some $30 billion in Chinese loans and grants. It sent a series of delegations to Beijing for that purpose.

Zimbabwe and its autocrat, President Robert Mugabe, need the money. The country is isolated, financially tattered, and increasingly desperate economically. Its financial obligations are $11 billion in arrears, and with its ongoing ideological standoff against the West, the nation is unable to borrow from the IMF, the World Bank and the UN. It has no viable industries, and with more than 85 percent of the population unemployed and an estimated 20-25 percent of Zimbabweans living outside the nation, an inability to secure a stability loan could breed serious political problems.

It appeared that China would step in, solve the autocratâ€™s problems, validate his so-called “Look East” policy, and gain a stronger foothold in southern Africa. The bailout would help stabilize the government and pacify a growing trend of middle- and working-class anger at the poor economy and corruption. The aid was being called a â€œfriendly boost.â€
Yet in what appears to be an embarrassing slap, Chinaâ€™s much-touted bail-out â€“ or at least Mugabe’s portrayal of it â€“ now appears to have fallen through.

Mugabe’s spokesmen have steadily downgraded the size of Chinaâ€™s support â€“ from $30 billion to $10 billion, to $3 billion, and then, in February, to $400 million.

Now it appears China wonâ€™t play Santa Claus at all. In what may be a harbinger of a tougher approach, it last week apparently ruled out any direct aid.

â€œWe donâ€™t normally provide budgetary support to other countries but we try to help Zimbabwe in our own way,â€ the Chinese ambassador to Zimbabwe told reporters.

Chinese officials and the business community in Shanghai told the most recent Zimbabwe delegation, headed by Finance Minister Patrick Chinamasa, that he needed to offer bankable projects instead of promises like the one he tried to sell Beijing to get cash.

Mr. Chinamasa had sought funding for the giant Zimbabwe Agenda for Sustainable Socio-Economic Transformation (ZimAsset), a $27 billion plan to bring economic revival. Zimbabweâ€™s entire annual budget is $4.5 billion, to give a sense of how large the request was.

Chinamasaâ€™s delegation tried to secure loans using the nationâ€™s mineral reserves as security. But the Chinese demanded an accounting of when Mugabeâ€™s projects would break even, and how a payment plan would work â€“ which Chinamasa did not appear to have ready.

“Mugabe cannot economically hold fort from now till 2018 without a huge financial boost, so we are likely to see more trips to China,â€ says Clive Moyo, an economic analyst based in Johannesburg.

“But, as we have seen in past times, such trips have mostly been fruitless when they concern huge financial aid, yet we keep trying. We are now like gamblers who keep putting money and efforts toward trying to land the jackpot, only to see yet another heavy loss. Unfortunately, no one else can bail us out, so it [is] a vicious cycle of hopes and heartbreaks.”

Since their controversial election victory last July 31, the Zanu (PF) government’s pleas for funding have gone unheeded, as more and more doors seem to be closing in their bid to turn around an economy that has faced 15 years of questionable management.

Earlier this winter Chinamasa failed in trips to Washington to secure IMF and World Bank loans.
The African Development Bank estimates Zimbabwe needs $14 billion to pay back lenders and be eligible for aid that stopped in 1999 because of arrears.

Now you know why Uhuru and Ruto are running around with ” cut wage bill” debate and ofcourse the government is dead broke!