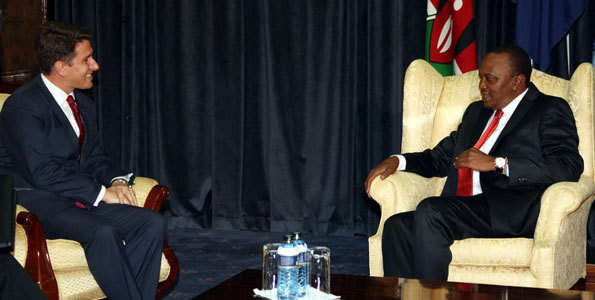 I hear from our enthusiastic media in Nairobi excitingly announcing that Britain will pay for mass immunisation to avert a polio epidemic in Kenya!

While am truly grateful to the British however, chances are, they just want to dispose off some expiring or even expired stock! Every little gesture helps though. Them!

What makes me really angry is that Kenya being a ‘Sovereign’ state continues to allow this nonsense to abound at the expense of the dignity of our people! We have money too but manage it terribly stupidly! The consequences are real and long term!

Our leaders love to ‘bend over’ our countries and resources to be raped- the true victims are the majority desperately poor people who have to accept food aid that’s unsafe for mice! Birth control methods that are dangerous for our women and children populations and systematic chemical extermination of a people in the name humanitarian aid!

Immunisation against polio is a thoroughly brilliant idea but in a country with little or no budget for disabled citizens, we still prioritise buying laptops for babies who should be learning how to hold a pencil and start to learn to write their own names! For this the ‘government’ will go the extra mile to intimidate ministries with ‘excess revenue’ to part with it to fund the laptop project!

And then, wait for David Cameron (a perfect example of undemocratic rule) to fund healthcare programmes and gain mileage at our expense! Independence is not only about freedom from colonialism but also freedom to solve our own problems! I mean also, what nonsense is this coming from London!

The British and indeed the West sustain corruption in Africa- there then IS ‘something in it for them’! To be quite honest, Britain is not in a position to fund any humanitarian project! Things are so elephant at home that somehow they hope this little gesture will gain more to sustain the overwhelming welfare budget and maintain their war machinery and propaganda!

Africa’s problems can be summed up simply as poor governance! We are cursed with plenteous catastrophic leadership! That is all! And The West loves it! They will never gang up to kill a corrupt leader! No no no! Try and provide leadership that secures the welfare and integrity of your people- you become an endangered species! And the propaganda will kill you several times over!

I say to Britain for the polio immunisation offer: NO thank you we are honest fine!

We are no longer a colony and yes, stop prolonging our suffering under the tyranny of your colonial guards in our State Houses! Truth be told, Britain has no interest whatsoever in promoting good governance anywhere in the world and particularly in Africa! How else would she survive?!

To our media I simply say- GOD help us! With media houses that brainwash the people- the match towards freedom becomes weary and long!

To our leaders: how much more shameless can you be when you are swimming in pure undiluted shame!

To our people, we have a long way to go and many of us will surely die in the wilderness! The consequences of our choices will affect our children and our children’s children to the 4th and 5th generations!

Get immunised against ignorance! This is the only way we will prevent polio, malaria, HIV AIDS, GM food parcels, dangerous birth control and Western sponsored conflicts ….and the many other tools that The West in collaboration with our corrupt stooges employ in their effort to exterminate our populations for our resources!

Africa with her bounty of natural wealth should be sending aid out to the rest of the world! If you look very carefully, you’ll notice Somalia on the brink, and Britain making preparations to tap the immeasurable liquid gold under Somalian soil! In fact, Somalia has been the envy of every western country that has desired not only the natural resources of that great land- but also lusted after Africa’s most beautiful people!

When it comes to Somalia, The British would rather complain about Bulgaria and Romania- of course Romanians and Bulgarians are beautiful people too, but Bucharest and Sofia have no oil fields- instead, they are feared to be the next most abhorred immigrants in Western Europe! The first most abhorred are Africans, the so called ‘common wealth’ particularly the ignorant!

If you need immunisation for ANY malady, except for Ignorance, you will always be unwelcome in London! Unless of course you are in leadership in Africa!

We are no longer begging! No, lets die with dignity lest we afflict the children too!

Trust me, I haven’t smoked anything!