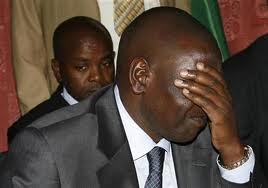 Uhuru Kenyatta has sharply contrasted his deputy William Ruto that his government will engage with the opposition to chat the way forward of the challenges facing Kenyans.

Ruto who has been reduced to the regime’s attack dog offered a stinging attack on CORD leader yesterday, he said Uhuru regime will NOT give in to CORD’s demands for NATIONAL DIALOGUE.

It was very embarrassing for deputy president Ruto when his boss President Kenyatta in his off-the cuff speech to Kenyans at Nyayo National stadium said he was happy with Raila’s call for DIALOGUE and said he will act soon to ensure his incompetent regime benefits from the experience of the icon- Raila Odinga and his team CORD.

The president also told off Ruto’s URP wing to FORGET the nusu mkate bullshit and concentrate in nation building.

Once again Ruto has been left with a rotten egg in the face !

Here is a summary of previous contradictions among the two Jubilee couple :

Public humiliations between UHURU and RUTO goes like this:

William Ruto: “We will not sign the Media Bill…”

Uhuru Kenytta: “We will sign the media…”, then he went ahead and signed

William Ruto: “We will not pay Anglo Leasing…”

Uhuru: “We will pay…”, then he went ahead and paid

William Ruto: “We have no time for empty talk like National Dialogue…” That idle talk…

Here is what the President said>>>

Here is what Ruto said yesterday;


Kenya-Today.com reported this morning that President had made last minute changes to his speech to accept Raila Odinga’s request for DIALOGUE.