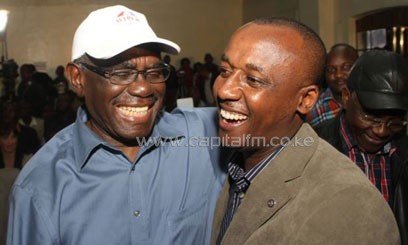 President Uhuru Kenyatta has today the 26th July shamed his top party leadership by congratulating the Makueni senator elect Hon. Mutula Kilonzo jnr, the president’s message goes against the aspirations of his party TNA that waged a vicious legal battle to wrestle the seat from Wiper democratic party.

Makueni residents saw a hidden hand of dark forces in the disqualification of the red hot favourite candidate for the seat-the peoples senator Kethi Kilonzo.

Nairobi – President Uhuru Kenyatta has this evening Congratulated the newly elected Makueni Senator – Mutula Kilonzo Junior (Jnr) and challenged him to get down to work and serve his people and the Nation at large at the Senate.

â€œ Your election is a chance to bring fresh ideas and I believe you will focus on service of the people and not politics,â€ The President said in his message.

Uhuru also commended the Independent Electoral and Boundaries Commission (IEBC) for once again overseeing a free and fair by- election despite the pressure from the competing political parties.

He however challenged the electoral body to take note of any challenges they faced so as to work on solutions that would benefit and ease processes in future elections.

â€œI also applaud the People of Makueni for their maturity during the entire process and on election day,â€ Uhuru said in his message.

Adding, â€œ we must however begin cultivating a culture where after elections are over and winners are announced, we continue with activities to create wealth for ourselves and the well being of the National Economy.â€

â€œLike every responsible citizen you have made your voice count through your vote, you voted in peace, upheld and respected the rule of law and in the end maintained the great image and promise of Makueni County.â€

Noting that the task of transforming the Nation was on track, The President challenged those who lost in the elections to channel their ideas through the newly elected senator so as to ensure the growth of Makueni County.

â€œElections are not an end, when the votes are counted and a winner declared, itâ€™s our role to ensure the people who voted benefit from service delivery as opposed to endless politics,â€ he said.

Uhuru also noted that the Judiciary played a critical role in arbitrating through out the process and therefore ensuring that the election was competitive.

â€œIt was that action that has ensured that the will of the People of Makueni was exercised,â€ noted the President.

The Kenyan Media also received accolades for their role in the by election, â€œ responsibility and informed coverage is a priceless gift any nation can get from its media and for that we assure you we will continue to be true partnersâ€

â€œThe Makueni by-election,â€ The President said, â€œwas by all means a victory for our National institutions and the growth of democracyâ€