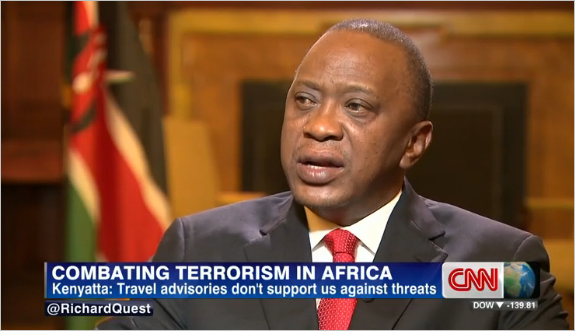 Well, the cat is out ! Uhuru Kenyatta who previously has indicated he DOESN’T need the West took his begging mission in American media giant CNN where he openly live on TV requested for USA and her allies to help the fight against TERRORISM !

Uhuru who was interviewed as a substitute guest after Nigeria tycoon Aliko Dangote snubbed CNN’s Richard Quest went before the world a humble man and begged for help from the West, one wonders what his PR machine will tell the masses now that he is begging Americans- embarrassing.
Click link below to watch Uhuru appeal for help and also Richard Quest’s tweets confirming the UKenyatta was a substitute guest

more @UKenyatta of Kenya "we do feel like the world is not doing enough to support us in confronting the challenges we face."

Oh dear. @AlikoDangote just left the building without doing interview. Never even got to say hello.

great insight from @UKenyatta "When you are in office you recognize it is not as easy as it sometimes seems when you're outside office."