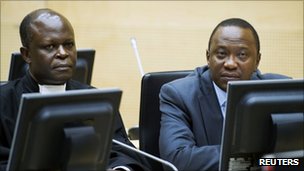 Should we also ask for deferral and termination of criminal cases facing ordinary Kenyans?

Kenyan justice system thrived on two sets of laws-Laws for the Hoi-polloi otherwise majority of Kenyans and laws for the rich, otherwise politically connected Kenyans. The Hoi-Polloi comprising of the poor, blue-color, hard-working, ordinary Kenyans were and to a larger extend still are disadvantaged. Our judicial system unleashes laws against the poor and ordinary folk to fullest extend-sometime justly but mostly unjustly. Laws for the ordinary Kenyans do not discriminate Kikuyu, Luo, Kalenjin, Luhya or whatever tribe. That is why there are so many ordinary Kenyans of all walks of life facing court cases for different crimes committed in different jurisdictions.

From the peak of Mount Kenya to the shores of Lake Victoria, every ordinary Kenyan accused of crime is required and left to carry his or her own cross. From the shores of Indian Ocean to the plains of Budalang’i, crime is tried and punished in accordance with the law of the land.

Additionally, when the rich and politically connected individuals commit crime, they cry wolf. Even when they are supposed to pay for their individual sins of omission and commission, or at least carry their own crosses; they fight tooth and nail to evade justice and promote impunity. They run helter-skelter claiming that their tribe, not them; is on trial. With confusion of a deer caught in the headlight, they claim that their country, not them; is on trial. More often than not, the rich and the politically connected individuals defeat justice. They cut corners in the corridors of justice. They either buy their way out of the consequences or influence a ruling in their favor. They have turned Kenyan into a double-standard republic. After all, our judiciary is filled by a larger percentage of men and women with epileptic conscience.

Yet, for our judiciary to prosper and for justice to become our shield and defender as is envisioned in our national anthem; Kenyan judiciary must adhere to Ronald Reaganâ€™s counsel. The former US president once said, â€œWe must reject the idea that every time a law is broken, society is guilty rather than the lawbreaker. It is time to restore the precept that each individual is accountable for his [her] actions.â€

Unfortunately, as the rich and the politically connected individuals operate in wanton impunity, the Hoi-Polloi are left to fight their own battles and fend for themselves. But as a self-proclaimed lover of justice, I appeal to fellow lovers of justice out there. Let us fight for the poor and ordinary Kenyans. The poor and ordinary folk deserve to find rest in our restless country of the rich.

However, if the rich men and women including politically connected Kenyan individuals can relentlessly call for deferral and termination of the most heinous crimes they\’re accused of by International Criminal Court (ICC) which include murder, rape and forceful displacement of innocent Kenyans, shouldnâ€™t all lovers of justice who envisions equitable nation; call for deferral and termination of all court cases facing ordinary Kenyans as well? Maybe, just maybe; after turning Kenya into a jungle, shall we truly begin to appreciate the rule of law. But make no mistake, â€œâ€œThe Arc of the Moral Universe Is Long, but It Bends toward Justice.â€ Someday justice will be served on the Kenyan table of equality.