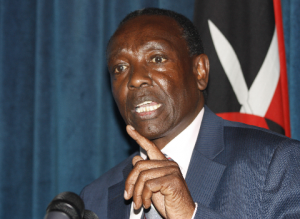 As our source had indicated in an opinion piece posted last week, the hawkish Muthui Kariuki has been redeployed and his position shut down, his functions will now be carried out from statehouse. Moses Kuria who was touted for the position is said to be gearing up for a position as AMBASSADOR.

Here is the message from Statehouse confirming Muthui Kariuki’s demotion!

Statement on Reorganisation of Government Communications

Government wishes to clarify how it communicates to ensure coherence, clarity andconsistency. The Office of Public Communication Secretary and Government Spokesman doesnot fit within the new structure of President Uhuru Kenyattaâ€™s administration and has consequently been shut. The Secretary Communication and State House Spokesperson will take the lead in communicating Government in its entirety.Mr Muthui Kariuki, the last holder of the Government Spokesperson post, has been reassigned within Government