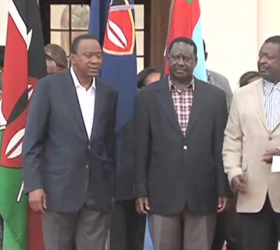 When Cord leader Raila Odinga first revealed to the nation that he and President Kenyatta had heldÂ  a telephone conversation over the ongoing security situation in the country, many Jubilee politicians were alarmed, even as the rest of the country got startled.

It was just a few days earlier that a bellicose president Kenyatta had lambasted the former premier, accusing him of pushing for a referendum to remain ‘relevant’ after losing the last elections. The dust had not settled when Westgate happened with a bang.

Over the weekend, as if to foreshadow, mama Ida Odinga had shared with the nation her secret of political survival in the four decades of Odingaism:” I never inherit my husband’s political enemies because you never know when they will become friends again”.

A decade short of half a century in active politics, mama Ida is a towering matriarch who has endured, celebrated, disappointed and outlived the battles her husband has waged for the oppressed of this country. She has seen the best and worst of Kenya politics as it pendulumed in her household. But I digress.

If you were keen yesterday, you would have noticed that Raila Odinga spoke to an international audience more than he empathized and cajoled the shocked nation. He spoke to world leaders. He addressed skeptical governments. When asked to comment on the impact of the Westgate attack on tourism, this was immediately after he left Visa Oshwal Centre, Odinga was categorical that the international community should not issue their notorious (my word) travel advisories, which in lay man’s terms is ‘travel warnings’.

Again at Statehouse later in the evening, Odinga, speaking after Musalia Mudavadi, again reiterated his call for the international community not to send travel warnings to their nationals hoping to visit Kenya.

The West Gate crisis has two dangerous bits which make it a ‘cool’ fear-mongering object for the international community (I mean western media). First, it is a mall, frequented by western expatriates. Sources even speculate it belongs to an Israeli. Two, the incident at West Gate has already been framed as a ‘terrorist attack’ by none other than the president of the republic, which gives the phrase some credibility of use by the international press. Again, a known terrorist group, the Al shabaab, is said to have accepted responsibility.

In the Western press, especially the British and American press, the terrorist group Al shabaab reeks eerily closer to Al qaeda, an anathema to the safety and security of western nationals. In USA, the mention of Al qaeda can ‘freak out’ so many and let people go scampering for safety. It just chills the blood of Americans. With this in mind, the US would not hesitate to issue its threatening ‘advisories’ using the slightest insecurity excuse.

This is a story about the country’s economy going down in doldrums at a time living expenses has skyrocketed. This is a story about a thinning tourism sector which has witnessed steep decline in tourist arrivals facing a more blurrier future. It is a story about massive losses in foreign exchange. But the West gate story is also one about a country whose leadership is increasingly giving the world all the reasons to worry – like those primitive displays at the ICC by Jubilee MPs.

Uhuru sough out Raila because he (Raila) stood a chance to directly talk to the international community. Odinga accepted Kenyatta’s invitation not just to show solidarity with the injured or remorse to the dead. He understood what a crisis like this can do to the economy of a country he struggled so much to build while he served as the premier. Odinga rose to the occasion to ensure the survival of our country.

In his two statements, Odinga mentioned top global powers by name. He called out Germany, Britain, France, the United States and reminded them, lest they forget, that terrorism has occurred right on their yards, that it was not an isolated event and that Kenya under president Kenyatta was doing all it could to mitigate it.

Tragedies like the West gate Mall often exposes a country’s national character. In my view, Kenya is an emerging democracy not because we hold periodic elections but due to such little political shows as we saw yesterday – constructive bipartisanship.

We are one. ooh really?