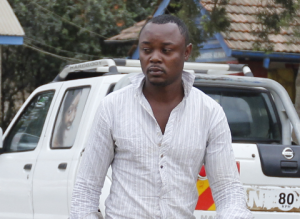 Ogundaâ€™s lawyer Cliff Ombeta said on Wednesday that the deceased suffered trauma to the head consistent with blunt force. Ombeta said he had received the results of the postmortem conducted by Government pathologists Peter Ndegwa and Johasen Oduor that revealed the deceased had injuries in the head that causedÂ  internal bleeding to the brain.

Samples were taken for toxicological testing.

Ogunda was found dead on Tuesday in a friendâ€™s house in Upper Hill area in Nairobi.

A container and a syringe were found beside his body.

According to police Ogunda had been with his friend Collins Okoth on Monday night on a drinking spree before they went back to the house at about 2 am. Okoth said he woke up at about 6.20 am and tried to wake up Ogunda but there was no response it when he reported the matter to the neaby police station.

Lawyer Cliff Ombeta called for thorough probe given the circumstances surrounding his client’s death, the autopsy report and death threats the deceased had received before his death.