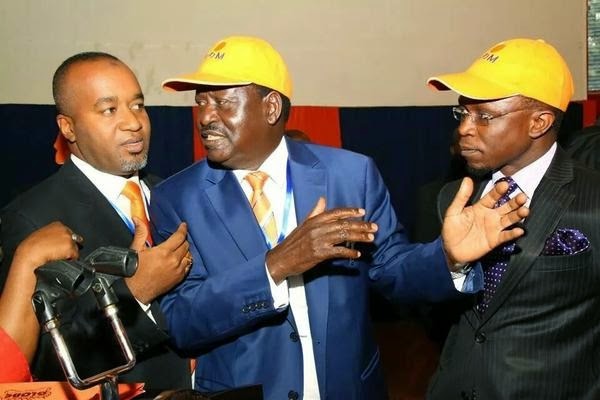 The last year has seen Kenya’s biggest political movement rebrand within its leadership ranks. As some politicians have lost out, some have been elevated to top echelons of the party’s decision making organs, making them forces to reckon with in the new year and ahead of 2017.

Here are the top ten politicians to watch in 2015.

Tried, tested and tried again; ODM Party Leader Raila Amolo Odinga remains the fulcrum of Kenyan politics and is becoming powerful every rising sun. The son of Jaramogi Oginga Odinga has outfoxed both friend and foe, remaining relevant and powerful in national politics despite having no elective position. Not only is Odinga an irreplaceable player inside ODM, he has remained the front-runner presidential candidate for CORD come 2017.

Together with Hon. Kalonzo Musyoka (Wiper) and Moses Wetangula (Ford Kenya), the trio has successfully presided over a coalition of MPs, senators and governors who have, in most occasions, remained loyal to their parties and overly to the coalition.

Odinga remains the biggest cog in the Jubilee regime dictatorial wheel of power. Throughout the year, the government has tried without much success to paint the ODM leader as an old man who should ‘retire’. However, with their manifest failures, the allure of a youth leadership has been a scary nightmare, making more people to continue looking up to Odinga. He remains the only voice which trembles the Jubilee regime. The Kenyan opposition is better off with Odinga for the foreseeable future, as he sets his eyes to another stab come 2017.

A longtime acolyte of Odinga, Mombasa Governor Ali Hassan Joho has set his eyes to 2022. In terms of standing up to the Jubilee regime, Gov. Joho has ensured Mombasa County does not become a hunting ground for politicians for hire, making him an instant enemy of the jubilee regime. He has endured personal humiliations for it, for the regime has kept alive his degree case, despite the courts finding him innocent of allegations of forgery. Â His election is among those which were challenged upto the supreme court. The DPP has reopened the certificate case in what observers say is a blatant collusion with the activist pushing it, one Mr. Otuke.

Within the ranks of ODM, Gov. Hassan Joho is a powerful and respected figure. During the last ODM National Governing Council meeting at Bomas of Kenya, Joho was the only other ODM leader who received a standing ovation from the delegates just before Odinga himself. He remains the ODM’s Deputy Party leader.

The democrat from Suna East is a fast-rising legislator in ODM owing to the unique dynamics of South Nyanza politics. Both a maverick campaigner and parliamentary debater, Hon. Â Mohammed is quiet but influential figure around the ODM party leader as he is believed to be part of the inner sanctum of ODM power.

With unfettered access to the party leader, Junnet is set to be even more influential after being propelled to ODM’s Director of Elections, a new post with significant political weight as he will determine who gets the Orange Party’s certificate and who does not. And with South Nyanza in turmoil, with most legislators pussyfooting about their loyalty, often penduluming between Raila and Kidero, some going as far as cozying with the Jubilee regime, Junnet is seen as a stable politician. He is also a first rising somali voice, a critical constituency that is swing to 2017 elections.

While Ababu Namwamba of today is really not the man who swore with the constitution that Raila Odinga won 2007 elections, the Budalangi legislator is still a force to reckon with in ODM. He was AWOL during the national dialogue rallies and has been accused of trading with the jubilee regime (because of instant riches he is claimed to have acquired in recent times) and bidding his time. However, Ababu remains a necessary voice in ODM, and compliments both the Party leader and the Deputy Party leader. Youthful, pragmatic and, oxymoronically, very obstinate, the democrat from Budalangi will have to once again prove his critics wrong ahead of 2017 as many in the party rank and file still feel he is yet to convince ‘us’ he is back in the fold. Did he ever leave? Now the Secretary General of ODM, Ababu is faced with the added task of ensuring ODM remains one indivisible force with the ability to mount a serious fight in any issue now till 2017. His performance during the security bill debate has shored up his ratings, as his youthful base within the party were deeply impressed. In 2015 and beyond, Namwamba can only set his gaze higher, for the Budalangi MP is still a ‘work in progress’ in ODM and the larger Kenyan politics. No doubt, history is on his side.

Often called ‘Richie’ within top echelons of ODM, the Kitutu Masaba legislator has been a consistent pillar of leftist politics in Kenya. He started out in NDP, was there in LDP and remained in ODM, Bosire is a longtime ally of Odinga. Fairly wealthy, he was recently endorsed as the party’s Treasurer, where he promised that every shilling the party spends must have an impact. He may not be a campaign politician but Bosire an economics graduate will be the man to ensure the party doesn’t waste a single cent. ODM is a fairly poor party and from 2013 and beyond, it will have to contend with with being out-financed as it competes TNA and URP, massive thieves of the national treasury!

The ODM Chairman also hails from South Nyanza, Homa Bay County. Mbadi is a czar on legislation which deals with financial accountability. His worth in national campaigns is yet to be seen and his first assignment will be to deliver the Homa Bay senate seat to ODM where the party has nominated the younger brother of the late Otieno Kajwang’ to fly its ticket.

The tough-talking Mombasa women representative has taken over from Millie Odhiambo who seem to have lost her mojo. Ms Mboko has been tough on tribalism, openly accusing Uhuru regime of perpetuating the worst form of ethnicity in Kenya. So blunt has Mishi been that she was accused of hate-speech and incitement, however, she maintains truth is hate speech to those who hate the truth. Mishi is fierce critic of those who were elected on ODM ticket but are now hobnobbing with Uhuru regime, accusing them of disloyalty and greed. She promises to be a tough player in ODM ahead of 2017 which makes him someone to watch in the new year.

The Siaya Senator may not be as fierce now as he was back in the 80S AND 90s but he remains a calming figure in ODM. He still comes out for those condemned by the regime and is representing virtually everyone in ODM and CORD. His law firm has become a pro-bono institution, and he spends hours pouring on legal documents and appearing in court in person to offer legal defence to ODM and CORD Â leaders and supporters.

The Kakamega governor has remained a staunch supporter of CORD activities just like Mombasa Governor Ali Hassan Joho. In fact, the two remain the most visible among the over twenty CORD governors.

Simba Arati is the MP for Dagoretti North, Nairobi. Within Nairobi constituency, Simba Arati and Westlands Tim Wanyonyi have ensured ODM activities are taken care of as Nairobi governor Dr. Evans Kidero keeps off ODM. The first term MP was recently bitten by a Jubilee legislator during the debate on security bill, now law. Simba has been discharged from Hospital. He is an ODM player to watch ahead of 2017.