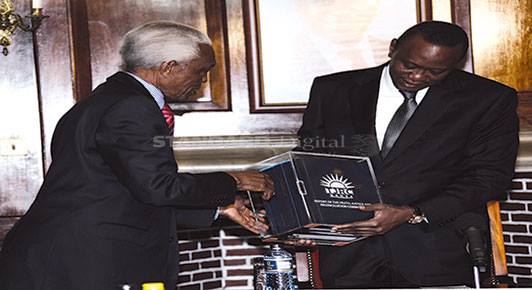 By: Felix Olick for the Standard

Senior Government officials and politicians are among hundreds of Kenyans recommended for prosecution in the explosive report of the Truth Justice and Reconciliation Commission (TJRC) released yesterday.

President Kenyatta and his Deputy William Ruto are among those adversely mentioned over the 2007 post- election violence for which they face trial at the International Criminal Court. No action is recommended against them.

The report also names a senator and scores of MPs from across the country accused of involvement in land grabbing, fanning ethnic clashes and brutal crackdown by security forces at the height of repression.

TJRC recommends that the Director of Public Prosecutions investigate the adversely mentioned individuals, against whom the report finds there is â€œample evidence capable of sustaining prosecution.â€

It also names dozens of former MPs, former provincial commissioners and senior military and police officers implicated in all sorts of violations including land grabbing and torture.

Also listed includes a host of serving senior police officers, including retired police chiefs and intelligence officers who are implicated in the torture of detainees and political assassinations.

Others named are prominent personalities and militia leaders involved in 2007 post election violence in Rift Valley and activities of the Sabaot Land Defence Forces in Mt Elgon.

The report names high-ranking government officials, including an MP in a top leadership position in the National Assembly who once served as a former Cabinet Minister for illegal excision of forest land.

Tuesday, President Kenyatta said the government would take the recommendations of the report seriously and reiterated his administration is committed to deepening healing and reconciliation in the country.

In a similar fashion to the Waki Commission, the Truth team details persons that should be investigated over irregular acquisition of land, massacres, political assassinations and ethnic violence including the gory 2007 post-election violence.

Ironically, the report recommends that TJRC chairman Bethuel Kiplagat should be investigated over the bloody 1984 Wagalla massacre and should not hold any public office.

â€œThe Commission ?nds that between 2002 and 2008, President Mwai Kibaki presided over a government that was responsible for numerous gross violations of human rights,â€ the report reads in part

The TJRC asks President Kenyatta to within the next three months issue a public apology to the families of those assassinated and the nation for the failure by previous regimes to resolve the murders. The report details far-reaching recommendations including seizure of illegally acquired land to address the thorny land problem at the Coast.

â€œWhile government officials benefited from illegal acquisition and allocation of government land to themselves and their close associates, coastal communities that were in dire need of re-settlement were excluded,â€ said the report

On extra judicial killings, the report recommends reparations for families of victims in accordance with the Commissionâ€™s Reparation Framework.Â  It recommends the prosecution of police officers and other state agents who were involved in the torture and ill treatment of individuals during the mandate period.