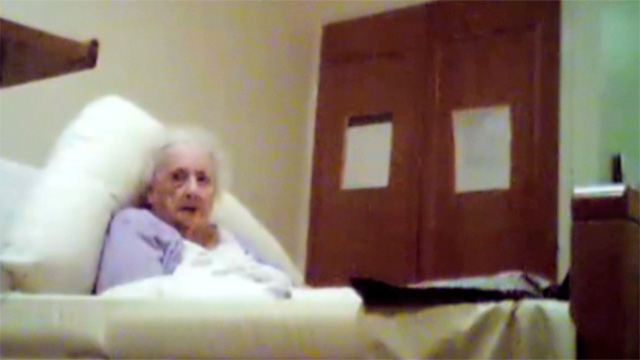 England Dragged across her bed and sworn at â€“ an appalling catalogue of abuse dished out to a 79-year-old gran with dementia by men meant to be her carers. Three carers who abused an elderly dementia sufferer were caught after her son set up a secret camera.

Terrified Gladys Wright, 79, was shoved, restrained and sworn at by the trio. Her son James, 45, said: â€œI was horrified â€“ it was horrendous.â€ Gladys Wrightâ€™s family thought at first the bruises that kept appearing on her frail body were the result of old age. They only discovered the truth after son James installed a hidden camera in her room at her care home.

The thugs â€“ Daniel Baynes, Tomasz Gidaszewski and James Njenga â€“ have been sentenced for the crimes that were captured in the secret footage. James, 45, said last night: â€œWatching it was challenging. I was horrified â€“ it was horrendous.â€ He added that he did not think he would see anything shocking in the footage.

James said: â€œI had no reason to believe my mum would be treated so badly. â€œI honestly just wanted to check up on her to make sure she was receiving the right care. â€œI genuinely didnâ€™t think I would uncover what I did. But when I thought about it I wasnâ€™t surprised. I reckon I could put that camera in any care home in any part of the country and I would see the same thing happening.

â€œIt doesnâ€™t matter how much you pay or where you send your relatives. Thatâ€™s why 24-hour CCTV in all homes is necessary.

The thugs mistreated his mum at the ï¿½800-a-week Granary Care Home in Wraxall, Somerset. The shocking footage shows distressed Gladys being pushed, shoved and pulled on several occasions while they subjected her to a tirade of verbal abuse. Baynes, Gidaszewski and Njenga can be heard in the recordings calling Gladys a â€œnasty aggressive bitchâ€ and saying to each other â€œf*** herâ€.

On one occasion Baynes, 24, attempted to force her eyes open. On another he pushed the distressed pensioner on her bed, while attempting to change her, before applying his weight on her legs to hold her down. While changing Gladys for bed, Njenga, 25 , is shown to hold the nape of her neck before forcing her backwards into her chair by grabbing her chin.

Gladys was admitted to the home in September 2012 when her family were no longer able to provide her with the care she needed because of her severe dementia. They hoped the specially trained staff at the Granary could provide the top quality care their mum needed. Three weeks later James placed a motion-activated camera, which also worked in night vision, in her room disguised as a clock radio. The equipment stored all the footage on a memory stick.

James, of Nailsea, Somerset, said: â€œI took the footage straight to the care home. I didnâ€™t go to the police â€“ I wanted to keep it hush-hush because in the beginning I didnâ€™t blame the home. â€œBut when you go in daily you see the problems and the way the management werenâ€™t tackling them. It was always a constant battle with them.â€ Then in January 2013, frustrated James handed the 57 DVDs of footage to police, and the three men were arrested.

The carers, who were suspended from their positions as soon as the evidence came to light, pleaded guilty to the abuse, which was carried out in October and December 2012. Baynes, of Bath, was handed four months behind bars after admitting three counts of ill-treatment or neglect of a person who lacks capacity, and another of theft after he was caught stealing Gladysâ€™s food. Njenga, from Bristol, was given two months in prison, suspended for two years after admitting three counts of ill-treatment.

Gidaszewski, 29, of Nailsea, was sentenced to 180 hours of unpaid work after admitting one count of ill-treatment. They were sentenced at Bristol crown court on Friday. The police probe revealed care workers in the home were recruited without any previous experience. Njenga had been recruited by the company after studying in Poland.

Jeremy Nixey, of Shaw Healthcare, which runs the home, said: â€œSince these incidents came to our attention, a new area and home manager have been appointed to oversee the implementation of an action plan looking at every aspect of the service provided at the Granary. â€œThere are many examples of good care at the Granary and across the Shaw Group.â€

A Care Quality Commission probe, carried out during the criminal investigation, found there were concerns about the care at the Granary. There is no universally agreed gold standard of care for people wanting to take up the work in Britain. Gladysâ€™s family kept her in the home after the abuse was exposed as they reasoned that staff would not treat her badly again. The mum-of-three, a former nurse, died of natural causes in March.
=3