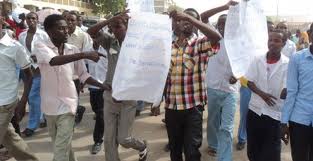 From time to time, students demonstrations have been viewed as the sources for moulding and practicing terrorism on the public. It has evolved to be apparent that there’s no way that under the blue sky the authorities can give a go a head for a student peaceful demonstration when they are request to do so. This comes from the notion that this is usually a mission to burn public property, terrorize innocent Kenyans and kill the animals that come in the sight.

As if this being not enough, a good part of the society have been made to believe that the first training one gets after joining any university is how to riot, mob, and destroy. Where?

I have been lucky to attend matriculations of severaal universities here in Kenya and if there is anything highly condemned by both student leaders and administration is Rioting. Alot of emphasis is usually put on its demerits and what one can expect if he or she engages in such. But does the public recognize that?

https://www.facebook.com/OkotiAluoraPatrickAs time goes, this notion has circulated so far among the Kenyan youths and its undebatable that most non students in the neighbourhood of academic institutions participate in the riots than students do. Speaking to NTV on sunday evening, Zack Kinuthia the serving SONU chairman was seen as a joker when he said this.

Those who have ever participated or if not participated, keenly observed the procession of some of these demonstrations can attest to this. Learning from the past, it can be remembered that in 2012 when one of the students was brutally murdered at the famous KM in the neighborhood on Kenyatta University, students were granted a permission to demonstrate peacefully within the university premises. This was well done by those who were leading all the way from KM to the gate singing and chanting mourning songs. But after they left the gate silently and satisfied they had mourned their colleague, unknown group of people lit fire along Thika superhighway tinting the name of this world class university.

Similar occurrences have taken place around the world, from Libya to Egypt students have been a voice for democracy and justice. However, the society has always used that as a platform to unleash their wrath that they had lacked opportunity to do.

Taking an examople of Libya, can you convince me to believe that those rioting around the country to oust the fallen Muammar Ghadaffi were all students?

Can you convince me same too for Morsi, the ousted president of Egypt?

University students are reasonable, rational and independent broad minded thinkers who scrutinize the reward of their actions before doing it. No engineering students persuing civil and structural engineering, who knows the burden and the expenses and the burden of constructing a tower will go to bring it down in minutes.

No single Economics students who is studying to control the economy of a country to prosperity will go down to burn shops and markets when all he is after in future is to stabilize this economy.

I add, no medical student will go to burn A kenyan yet knowing the possible consequences of burns on a human being.

As a result, the society has proved to be hostile, careless and negligent on the needs and desires of this group of kenyans.

I write today and one day you will agree with me, “That a cat can be very wild not worth taming if you dare subject it to the wildlife.”

It is a high time the the society reason out and do away with the negligence of the role of the students and accept them in society.

University students are just also human beings and need to be accepted in this society for the common good of us all.

Students don’t Riot, they demonstrate, It is the public that riots.

God bless all university students, and May God Bless Kenya.