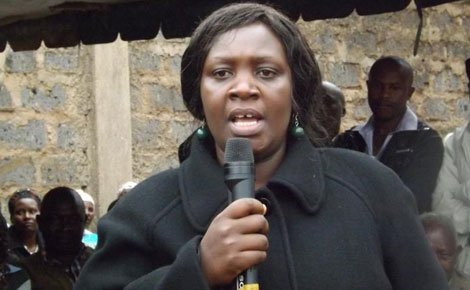 Candidates from President Uhuru Kenyatta’s TNA and Deputy President William Ruto’s URP are expected to face off in the Gatundu South by-election. This is after Joyce Ngugi, the former area MP’s widow, vowed to contest the race to succeed her husband on a URP ticket.

She announced her decision on Tuesday moments after her challenger in the controversial TNA nominations, Moses Kuria, was given the green light to vie on the party’s ticket by the Dispute Resolution Tribunal.

“The voice of my supporters says I should be on the ballot on August 7. I was rigged out in favour of Kuria but I will contest on a URP ticket,” Mrs Ngugi told local reporters.

Ngugi had contested the party nominations held on June 23 in which Kuria was declared the winner with 8,343 votes against her 6,685 votes. The widow had wanted the party to declare her the winner, claiming she beat Kuria in the nominations while another contestant, Joachim Kamere, wants the exercise repeated.

Tribunal chair Faith Waigwa said the grounds for contesting were not valid.