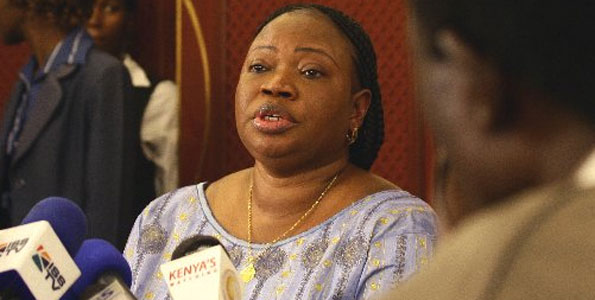 Ladies and Gentlemen of the Media

Thank you for being here for this early afternoon briefing. I wanted to start the programme of this my first official visit to Kenya as ICC Prosecutor by meeting with you and introducing myself. Let me also briefly outline for you why I am here and what I intend to do. Then I will be pleased to answer a few questions from the floor.

As you may be aware, I was nominated and supported by the African Union as the sole African candidate for the position of ICC Prosecutor, to which I was unanimously elected by the 121 States Parties on 12 December 2011. I am deeply indebted to the AU and African leaders including President Kibaki, for their confidence in me. Their support is yet another example of Africaâ€™s commitment to international justice and their desire to end impunity. For the next nine years, I have the privilege, honour and the responsibility to serve as Prosecutor of the International Criminal Court, Having been nominated and supported for this position by the AU, I consider myself to be a mere extension of the African fabric for ending impunity. In carrying out the mandate given to me by the 121 States Parties, I am guided by the law and the cardinal principles of independence, impartiality and fairness.

My mandate is to investigate and prosecute those most responsible for the worldâ€™s gravest crimes, where no-one else is doing justice for the victims. Our purpose, my purpose, is to seek the truth. By doing so, by bringing justice, we can provide some solace to survivors, restore dignity to shattered lives and the memory of those who were killed. We do this with utter respect. Respect for the primary responsibility of national judicial systems to carry out genuine national proceedings against those alleged to have committed crimes, respect for the rights of the accused and above all, respect for victims, all as mandated in the Rome Statute.

Kenyan victims, the women, men and children who suffered during the dark days of 2007-2008 are my priority, my daily motivation. They always have been and they always will be.

I arrived in Kenya yesterday and plan to be here for the coming week. While here, I plan to meet with key government figures, notably President Kibaki and Prime Minister Odinga.

You will recall that on 3 July 2009 my predecessor met with a high level delegation of Kenyan government officials in The Hague. Agreement was reached with the representatives of the Kenyan government that should the Kenyan authorities carry out genuine judicial proceedings against those most responsible for PEV, the Office of the Prosecutor would have no ground to intervene. My predecessor and the Kenyan delegation agreed that impunity was not an option.

On 5 November 2009, after being informed by the Kenyan authorities of the unfortunate gridlock at the national level, my predecessor met with President Mwai Kibaki and Prime Minister Raila Odinga in Nairobi. He informed them that since all the statutory criteria were fulfilled, and since the Government of Kenya had been unable to reach agreement on the establishment of a local tribunal to deal with PEV crimes, it was his duty to open an investigation into the alleged crimes.

Accordingly, he requested the cooperation of Kenyan national authorities with the Court. He recalled the complementary roles of the ICC and the Kenyan authorities in combating impunity. The President and Prime Minister issued a joint statement in which they recorded their constructive meeting with the Prosecutor. The Government stated that it remained fully committed to cooperating with the ICC within the framework of the Rome Statute and the Kenyan International Crimes Act.

This continues to be the framework of the interaction between the Court and Kenya. During my stay in Kenya, I plan to meet with the people of Kenya, civil society and the diplomatic community, to thank them for the critical support they have provided and continue to provide for the work of the Office.

I am here to listen. Through a number of public and media events in the Rift Valley, I plan to exchange views with ordinary Kenyans, including with victims groups regarding ICC process.

The Judges of the ICC have agreed that four suspects must face justice for crimes they allegedly committed during the PEV. The ICC Judges have agreed there are substantial grounds to believe that the four suspects committed the crimes they are charged with and that the cases should go to trial. The four are presumed innocent until proven guilty and the burden of proof is on my Office to prove the cases against them beyond reasonable doubt. Let me stress this: the people of Kenya are not on trial; the Government of Kenya is not on trial and no ethnic community is on trial before the ICC. The allegations concern individual criminal responsibility. The four accused will have a fair trial and an equal opportunity to refute the allegations. Their guilt or innocence will be established by the Judges at the conclusion of these trials.

As with any judicial process we face challenges. We are working hard every day to address efforts to interfere with our witnesses and our evidence. We are also working to resolve delays in the execution of our requests by the Government of Kenya.