Below is the alleged letter from Statehouse to state law office seeking advice on how best the regime should deal with Raila and the entire CORD brigade. Treason charges is what was being considered, shocking? 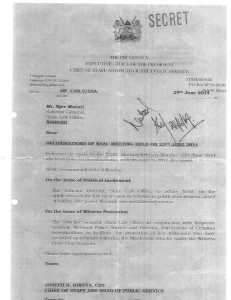 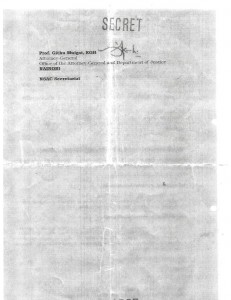 Statement by CORD Coalition on return of state terror

We are in possession of a copy of a letter dated 24th June 2014 written by Mr. Joseph K. Kinyua, the Chief of Staff and Head of Public Service and addressed to Njee Muturi, the Solicitor General and copied to Prof. Githu Muigai, the Attorney General whose contents are extremely disturbing and constitutes a drastic reversal of the democratic gains attained by the enactment of the New Constitution.

The letter demonstrates the desire and scheme of the Jubilee administration to use the law of treason to achieve political objectives, unrelated and extraneous to the principles and jurisprudence of Kenyaâ€™s criminal justice system. This letter is the clearest indication that the Jubilee administration wants to arrest and detain the leaders of CORD on charges that have no basis in our Constitution and the law in order to emasculate the opposition and give the regime opportunity to introduce the imperial presidency and despotic rule. We are also concerned that this initiative by NASC excludes the office of the Director of Public Prosecution, a constitutional and independent office with the mandate to institute and undertake or to withdraw and terminate criminal prosecutions.

The Governor of Lamu county was recently arrested and detained without charges on the pretext that he would be arraigned on offenses under International Crimes Act. No such charges have been preferred to date. This was a case of politics and the Governor should be left alone so that he can continue with his work in Lamu.

In 1997 the law of sedition was repealed from our Penal Code under Act No. 10 of 1997 because of the trend in those years of dragging Kenyans into criminal courts under that law. The law of detention without trial has also been replaced.
The Jubilee regime cannot be allowed to take Kenya back to the dark old days where state terror was directed against patriotic Kenyans who were struggling against dictatorship and injustice in the name of state security.

CORD remains firm and steadfast in its commitment to make Kenya a better place to live in and no amount of intimidation or harassment will compromise CORDâ€™s relentless struggle to enable the people of Kenya reap the fruits of the New Constitution.

Finally we are concerned about the membership of the National Security Council and the National Security Advisory Committee which does not portray the face of Kenya and is prone to fall prey to the advancement of a parochial and hegemonic agenda in the country to the detriment of national unity.