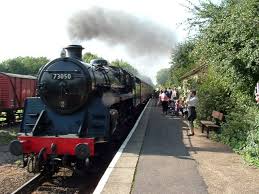 It turns out the Standard Railway Gauge deal signed by HE Uhuru and Chinese premier will be nothing modern but a 19th century locomotive model powered by diesel. Diesel powered engines are harmful to the environment, not efficient and have no place in the future. We are basically investing billions in an obsolete technology!

Ignore the talk of corruption, the real challenge is the technology to be applied, raising questions as to the sincerity of the so called digital regime. The billions being invested are enough for a modern electric powered railway. The trend world over is electric engines and biofuels, therefore Kenya should settle for nothing less than an electric railway.

When it comes to powering a locomotive, electricity wins hands down !

Before going any farther, a brief review of 20th century U.S. transportation history is in order.

I was born in the age of the diesel loco. Steam as locomotive propulsion power, although reaching a zenith right around World War II, quite interestingly, maintains a presence, albeit a shadow of its former self by comparison. By the time diesel-electric motive power arrived on the American scene beginning about the late 1940s, steam had served as a viable propulsion power technology for a century-and-a-quarter at least. Incidentally, electricity as a power source first showed up in 1888.

Continuing with this train of thought, there were more line-haul railroads tapped into electricity in the past than there are today. A part of the Virginian Railway as well as significant portions of the Chicago, Milwaukee, St. Paul & Pacific or the Milwaukee Road for short, were once electrified. For a time, the Great Northern on its route through the Cascade Mountains in the Pacific Northwest also ran electric trains as did the New York, New Haven & Hartford, the New York Central, and the Pennsylvania, on parts of their lines.

In California, where I reside, two major electric interurban passenger railroads to give up the ghost were the Key System (connecting Oakland and San Francisco) and the Pacific Electric in the southland. That these pikes met their demises, in my view, appears to have had more to do with competition from transit buses than with any other single factor. Three words: â€œNational City Lines,â€ immediately come to mind.

FYI: by the time diesel locomotive propulsion really started coming into its own, automobiles had been on the scene for some 50 years.

At any rate, at the time of the big railroad switchover, fuel was plentiful and railroad money to pay for that fuel seemed no object. Even so, the introduction of the motor vehicle and flight and highway and road construction coming on like gangbusters, it was these inroads which actually affected railroad bottom lines and what turned the tide. Adding injury to insult, whereas the trucking industry, for instance, was zero-percent regulated, railroads, on the other hand were for all intents and purposes zero-percent unregulated or 100-percent regulated, in other words. They simply couldnâ€™t compete and competition was absolute if railroads had any hope of surviving.

Now enter the Railroad Revitalization and Regulatory Reform Act in 1976 followed in 1980 by the Staggers Act. These two acts in essence deregulated the American railroad industry enabling it to be on more equal footing with its truck and air transport counterparts.

Once able to regroup American railroads recovered from their losses and the rest is â€“ as is so often said â€“ history.

Operating costs and other considerations

Looking at railroad operations, outside of intercity (or interurban) and urban passenger rail that by-and-large employ electricity to run trains, the bulk of operations in America is diesel-electric-technology oriented. But the decision to go that route I believe had as much to do with the availability of fuel as it did the expense of building expensive electric infrastructure even though over the long haul electric operation is more cost effective, not to mention environmentally friendly as long as that electricity is generated cleanly.

Today, U.S. electrified mainline railroads are few and far between. Those coming immediately to mind are Amtrak with its quasi-high-speed 457-mile Northeast Corridor (NEC) connecting Boston and Washington, D.C. and on the line connecting Philadelphia with Harrisburg. Less extensive but no less notable are the Black Mesa & Lake Powell, the Deseret Western, and the 10-mile-long Iowa Traction. The Iowa Traction, by the way, has been in operation since 1898.

Staying with this theme, the reason that many of the urban passenger rail carriers rely predominantly on electricity to power trains today is apparently due to the efficacy of electric operations, that and the fact that fuel costs have been escalating, coupled with the environmental and safety benefits, it all speaks volumes. Also, looking at electric operations from a costs-versus-benefits standpoint, electric compared to diesel-electric operation is more attractive. The upfront costs of building such a railroad, however, are no doubt higher.

As Kenyan begins to tread new surface transportation territory with high-speed rail, power for such should be via electricity â€“ clean electricity.