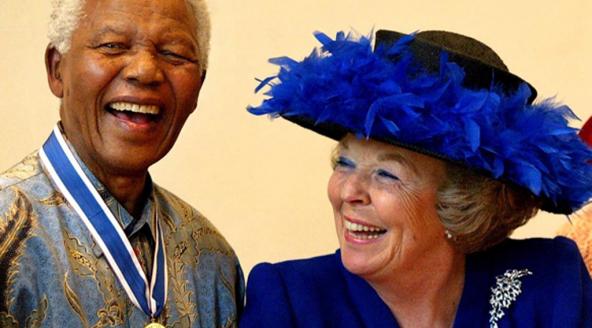 In this speech made by Mandela in 1999, the late icon reveals the special relationship

Toast at the Banquet hosted by Queen Beatrix

Following Your Majesty`s extremely successful State Visit to South Africa in 1996, we have been eagerly waiting for the opportunity to respond to your gracious invitation to be your guest.

I have fond memories of the understanding that you displayed of the hopes of our people and the many challenges that we still face. The warmth which you experienced in our country showed the special place that the people of South Africa have in their hearts for your people.

Between this visit and my last visit to the Netherlands in 1990, stretches a momentous period in the history of our country. Then I was a newly released prisoner still fighting for freedom in the land of his birth. Now our first democratic government, and my own public life, draw to a close. It brings me the opportunity – as one who can look back over many decades – to record our people`s appreciation of those who have walked the long road towards freedom with us.

History has joined our two countries for many centuries. Such a long and complex involvement has both positive and negative aspects, painful as well as joyous. But what counts, is the support which the Netherlands have given to the struggle for liberation in South Africa and to the healing and rebuilding of our nation.

Your Majesty, it was that commitment to freedom and justice which our people associate with the Netherlands, that motivated your grandmother – the Great Queen Wilhelmina – at the tender age of 18 to express her support for the struggle of the Boers against colonial oppression.

The insistence by the people of the Netherlands and their Royal family that justice and freedom are nothing if not universal, led them to identify with the struggle for the liberation of all South Africans from the apartheid system.

In this regard, we recall how Your Majesty`s Mother, Princess Juliana, when still Queen, made a personal financial contribution in 1971 to the World Council of Churches` Programme to Combat Racism. We know that the frailty of old age keeps her from being with us tonight, but I would like you to convey my deep gratitude and respect to her.

It was that unqualified commitment to freedom and justice that moved so many ordinary citizens of the Netherlands to make an extraordinary contribution to the anti-apartheid struggle.

When sanctions were needed in support of freedom a large part of the Dutch population were in the forefront of the world campaign to isolate the apartheid regime. When the time came to lift sanctions, there were few countries that moved faster to do so.

We will always remain grateful for these and the other campaigns that the Dutch people shared with us.

It is a special pleasure that some of those who played a leading part in these campaigns are here tonight. Their decision to restructure their organisations to become partners in the reconstruction and development of our country is again consistent with that commitment to freedom and justice.

Your Majesty, in yourself and your husband, His Royal Highness Prince Claus, South Africa has special partners in our commitment to a peaceful and equitable world.

I should however use this occasion, if I may, to say that although I was gratified by Prince Claus` praise for my shirts, I did become worried when I heard that in his enthusiasm he took off his tie in public and cast it away. I was afraid that Archbishop Desmond Tutu, who has complained about my dress sense, might start blaming me for being a bad influence on others!

More seriously, Prince Claus` longstanding involvement with Africa, and his understanding of our continent`s problems, are quite remarkable. It therefore gives me great pleasure to be able to announce our intention to bestow on him, as we have previously done on Queen Beatrix, my country`s highest order, the Order of Good Hope.

Our countries, the one from the North and the other from the South, have all the potential to work even closer together to address the huge socio-economic challenges that none of us can escape in this globalised world.

The rapid expansion in economic ties since we achieved democracy; your generous support for our development; and our co-operation in pursuit of the peaceful resolution of conflict are all part of an all-embracing relationship that grows closer and warmer by the day.

There could be few better ways to express the special relationship between our two countries than in the poetry of Elisabeth Eybers. I am indeed very happy that Elisabeth Eybers is present here tonight.

Ladies and gentlemen, I ask you all to join me in a toast to her Majesty Queen Beatrix and the people of the Netherlands; and to the flourishing of friendship between our peoples.