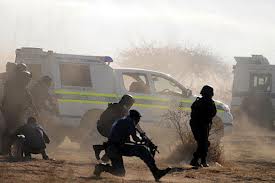 This article titled “South African police ‘shot miners to protect themselves'” was written by David Smith in Johannesburg and agencies, for guardian.co.uk on Friday 17th August 2012 11.58 UTC

South African police killed 34 people at the Marikana platinum mine when they opened fire to protect themselves from armed protesters, the country’s police commissioner has said.

Riah Phiyega told a news conference that her officers acted to protect their own lives after strikers armed with “dangerous weapons” charged. She said the strikers had not dispersed earlier, despite police use of water cannon and stun grenades.

Police have been accused of a massacre after shooting at the mine workers on Thursday in one of the bloodiest days of protest in South Africa since the end of apartheid.

President Jacob Zuma is returning from a regional summit in neighbouring Mozambique to address the crisis that is seen as deepening the rift between his scandal-plagued ruling party and an increasingly angry electorate confronting massive unemployment, poverty and inequality.

In scenes that evoked memories of some of the country’s darkest days, national television showed pictures of police in helmets and body armour shooting at workers amid shouting, panic and clouds of dust at the mine, owned by the company Lonmin. After three minutes of gunfire, bodies littered the ground in pools of blood.

The deaths came after a week of turmoil at the Marikana mine that had already seen 10 people killed, including two police officers and two security guards. Lonmin, the world’s third biggest platinum producer, was forced to suspend production at the mine, about 60 miles north-west of Johannesburg, after what it called an illegal strike escalated into an alleged turf war between rival unions.

His voice shaking with anger, the union leader Joseph Mathunjwa on Thursday accused the Lonmin management of colluding with a rival union to orchestrate what he described as a massacre. Mathunjwa, president of the militant Association of Mineworkers and Construction Union (AMCU), told the eNews channel: “We have to send condolences to those families whose members were brutally murdered by a lack of co-operation from management. We have done our bit. If the management had changed their commitment, surely lives could have been saved.”

Zuma, speaking on Thursday, condemned the killings but made no reference to the handling of the situation by the police. “We are shocked and dismayed at this senseless violence,” he said. “We believe there is enough space in our democratic order for any dispute to be resolved through dialogue without any breaches of the law or violence.”

The opposition called for an independent investigation. Helen Zille, leader of the Democratic Alliance, said: “We call on union leaders, the police and everyone else involved to immediately work towards a de-escalation of the conflict. All action must be taken to avoid further bloodshed.

“An urgent independent investigation is required to determine exactly what happened; and who is responsible for this massacre. The families of everyone involved, and indeed the nation, deserve to know how and why this bloodshed occurred.”

Roger Phillimore, the chairman of Lonmin, said: “The South African police service have been in charge of public order and safety on the ground since the violence between competing labour factions erupted over the weekend, claiming the lives of eight of our employees and two police officers.

“It goes without saying that we deeply regret the further loss of life in what is clearly a public order rather than labour relations-associated matter.”

The violence reportedly flared when police laying out barricades of barbed wire were outflanked by some of an estimated 3,000 miners massed on a rocky outcrop near the mine. Witnesses claimed that some of the miners were armed with pistols and fired first, while also charging the police with machetes and sticks.

The Congress of South African Trade Unions (Cosatu) said: “According to a Sapa [South African Press Association] report, police tried to disperse striking workers gathered on top of a hill, wielding pangas and chanting war songs. It ended in a three-minute shootout between the two groups, after police fired teargas and then used a water cannon to disperse the strikers, who retaliated by firing live ammunition at the police.”

The protests began last week when workers demanded a pay increase to 12,500 rand (Â£976) a month. The action turned deadly when the AMCU clashed with South Africa’s dominant National Union of Mineworkers (NUM).

The NUM rejected the charge of collusion with mine bosses. Spokesman Lesiba Seshoka said: “We are not surprised by his allegation â€¦ It is not true. Everyone can see through these lies.”

Seshoka blamed the AMCU â€“ which has been poaching NUM members in platinum mines â€“ for instigating the bloodshed. “These people said today they want to die on the hilltop. They said they will bring their children to die there. That is why we say the ringleaders must be arrested.”

There has been growing frustration with the governing African National Congress and its mainstream union allies for moving too slowly to deliver wage increases and public services. Radical and militant voices are making gains in some areas.

Patrick Craven, the national spokesman for Cosatu, which is aligned with the ANC, said it would “convene an urgent meeting of the unions’ leaderships to discuss what is emerging as a co-ordinated political strategy to use intimidation and violence, manipulated by disgruntled former union leaders, in a concerted drive to create breakaway ‘unions’ and divide and weaken the trade union movement”.

He added: “Cosatu calls upon all workers to remain vigilant but calm in the face of the most serious challenge to workers’ unity and strength for many years.”

South Africa is home to four-fifths of the world’s known platinum reserves but has been hit by union militancy and a sharp drop in the price of the precious metal this year. At least three people were killed in fighting in January that led to a six-week closure of the world’s biggest platinum mine, run by Impala Platinum. Such incidents are seen as tarnishing South Africa’s reputation among investors.

This week’s violence has forced Lonmin to freeze production at all its South African operations, which account for 12% of global platinum output. The company’s London-listed shares fell more than 7% on Thursday. A spokesman at Lonmin’s head office in London confirmed strikers had been served with an ultimatum to return to work on Thursday or face dismissal, but denied that might inflame the situation.

“The mine cannot operate without the rock drill operators,” he said. “The company tried every avenue it could to negotiate a settlement and we were left with no option.”