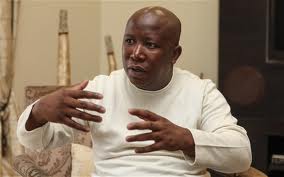 They were there in their thousands, leaning against tin shacks or sitting in the dusty veld: miners and their wives still looking for answers after a massacre by South African police that left 34 striking workers dead. A red T-shirt worn by a rally organiser seemed to offer one, stating: “Fuck capitalism.”

The huge crowd erupted as a charismatic young politician, Julius Malema, took the microphone. He is seen by some as a dangerous demagogue, but to the grieving, angry community at the Lonmin mine in Marikana he came as a messiah offering a radical future.

“The British are owning this mine,” he said. “The British are making money out of this mine … It is not the British who were killed. It is our black brothers. But it is not these brothers who are mourned by the president. Instead he goes to meet capitalists in air-conditioned offices.”

Malema was expelled this year as president of the youth wing of the governing African National Congress after falling out with President Jacob Zuma, whom he accuses of failing to challenge “white monopoly capital”. He has since been in the political wilderness; once contemptuous of the media, he now courts it. As the Marikana tragedy lays bare discontent over inequalities 18 years after apartheid, he senses his moment.

“President Zuma said to the police they must act with maximum force. He did not say act with restraint. He presided over the murder of our people and therefore he must step down. Not even apartheid government killed so many people … From today, when you are asked ‘Who is your president’, you must say ‘I don’t have a president’.”

There were cheers from people whose votes the ANC can no longer take for granted after 18 years in government.

It was the promises of a militant union that stirred violence at Marikana, where the ANC-aligned National Union of Mineworkers has been losing support. Malema hopes this will be mirrored on the national stage, where he accuses the ANC of failing to pursue economic freedom as it did political freedom, leaving millions of black people poor and disenfranchised. He wants mines to be seized from private companies and nationalised. The call appears to be gaining traction in Marikana, where workers are demanding from Lonmin, whose HQ is in London, a wage increase from 4,000 rand (Â£300) to 12,500 rand a month.

“Lonmin treat us like dogs,” said Thembelani Khonto, 24. “When you’re underground, it’s like you’re a slave and they don’t know you. But on the surface people who don’t do anything in offices are earning more than us.”

Siphiwo Gqala, 25, said he sometimes spends up to 14 hours a day underground but does not receive overtime pay. “It’s dangerous work,” he said. “Sometimes you go down there and a rock falls and you die. Big vehicles can come and kill you.” Recalling Thursday’s massacre, he said: “I’ve never seen something like that: people killed like chickens. One of my friends is still missing. I don’t know if he’s in the hospital or the mortuary.”

The impact on the community will be far-reaching, added Gqala, who lives in a shack because house rentals are too high. “Women come here from Eastern Cape with their husbands, who are the breadwinners. If someone has five children, how will they live? I have two young brothers depending on me. What if I die? Who’s going to look after them?”

The conditions leave people like Gqala looking for radical solutions. “The mine must be nationalised. We support Julius Malema and the youth league for saying the mines must be nationalised. Now they’re starting to shoot us. If we die today, all of us must die: we no longer want to work here.”

Two days after the shooting, in which 34 people died and 78 were injured, many families are still waiting to learn the miners’ fate. A casualty list has still not been published and there is little information on who is dead, injured or under arrest. Wives have been turned away from local clinics and hospitals.

A 22-year-old woman, who did not wish to be named, had lost a loved one in the shooting. “He was shot in cold blood,” she said. “My tears have not dried; I cried all day. I’m worried about things like who’s going to feed the kids he left behind. No one is going to give the love to his children like their father.”

Elizabeth Makana, 48, a widow whose brother-in-law was wounded, said: “They treat the miners like dogs. The miners take the risk to dig platinum, but the people who sit in offices make the money.”

Lonmin defended its treatment of mine workers. A community development brochure published by the company describes extensive health, education, infrastructure and economic projects in the area. Spokesman James Clark said: “We absolutely recognise the hugely positive relationship we have with communities living in the area and doing the best we can for them and their families goes to the heart of our business. It’s why we do so much around health and education, but we’re not complacent. We do the best we can and try to do better every time.”

That will not satisfy Malema and his constituency, however, who argue that the ANC has been too moderate for too long, bending the knee to western corporations. Flashpoints like Marikana expose the fissures in a party that contains capitalists and communists.

Aubrey Matshiqi, a research fellow at the Helen Suzman Foundation, said: “I think the people of Marikana, particularly the miners, see themselves as the manifestation of the gap between mineral wealth and socioeconomic conditions. The death of so many miners has amplified the extent to which Julius Malema’s views on mine nationalisation resonate with the people in the area.”

He added: “You have the ANC that some people believe has been too pragmatic and sold out and bent over backwards for foreign capital at the expense of the people. Julius Malema suggests that a better life for all would be possible under someone like him. If he is wrong, you will have populism and disappointment that will lead to conflict.”