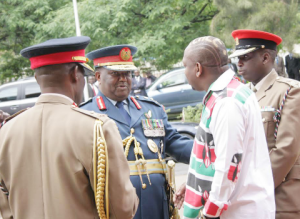 Flamboyant Nairobi Senator Mike Sonko has dismissed reports published in the Star newspapers that there is bad blood between him and the powerful Chief of Defence forces General Julius Karangi.

Reacting to the story published in the Star indicating that Karangi stopped him from welcoming President Uhuru Kenyatta at Nyayo Stadium during the Jamhuri Day celebrations, Sonko denied the occurrence of the event saying he only arrived late at the event. ‘I arrived late at the Stadium because I was in Kibera till late Said Sonko in his statement to the Star.

Sonko has said he has a very good working relationship with Karangi and he has even promised that after the Deputy President William tenure as Head of state God willing in 15-20yrs from now the army Generals will be ushering him at the Nyayo Stadium during public holidays as the Commander in Chief.

”This writers should watch out they don’t know maybe in future I will be inspecting a guard of honour not of City Hall but of the KDF. I never took advantage of the absence of Nairobi Governor Evans Kidero to welcome the President at Nyayo Stadium, in fact I have direct access to State House and the President is a personal friend to me and he has never let me down.

Last week Sofapaka were invited at statehouse to present the GOTV trophy courtesy of the flamboyount senator.

Recently Sonko’s lawyer Lydia Kwamboka was put in the panel of lawyers representing the state and her name was in the Governments delegation to NewYork for the ICC’s State Assembly conference.

Kwamboka an advocate of the High Court of Kenya was nominated to represent the state at the 13th session of the assembly of state parties to the Rome statute of the ICC conference in New York from December 8th – 17th.

At Nyayo Stadium where Jamuhuri celebrations were held Senator Sonko’s seat was preserved behind the first family, he sat between Cabinet Secretaries Henry Rotich, Najib Balala and phylis kandie.