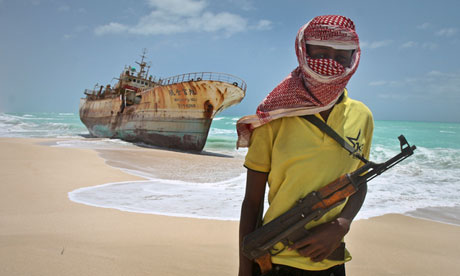 A Somali pirate stands near a Taiwanese vessel that washed up on shore after a ransom was paid and the crew released. Photograph: Farah Abdi Warsameh/AP
By: Jessica Hatcher in Mombasa for theguardian.com, Friday 16 August 2013

They once terrorised the Indian Ocean, seizing dozens of ships every year, extorting millions of dollars in ransom money, and eventually drawing a military response from the international community.

Now the pirates of the Horn of Africa are in danger of becoming extinct. It is not just that warships patrol the waters with a 30-minute response time and that many target vessels now carry armed guards. It’s that many of the pirates are currently enjoying a transformative stint in jail.

There are more than 100 convicted and suspected pirates incarcerated at the Shimo la Tewa maximum security prison on the Kenyan coast. “They like it here,” a warden says.

The residential quarters of the prison’s piracy wing is behind a heavy metal door. The 111 convicted and suspected pirates do not call themselves pirates; they prefer “fishermen”. As many as 30 have never had their cases heard in court, according to prison staff. Some have been on remand since 2009. Asked whether they felt abandoned or dissatisfied with the legal system, most said no. “It’s fine here,” says one.

The objective at Shimo la Tewa prison is that inmates leave with the means to earn a living and do not fall back into piracy, the warden says. Inmates are taught to read and write, given free healthcare and adequate food, and taught new skills.

They are encouraged to retain links with their families in Somalia through regular phone calls. When it comes to recreation, they play football and sing. The prison feels more like a technical college. There are classrooms, a barber, a furniture workshop and a paralegal service run by volunteers. The walls are painted in bright blocks of colour reminiscent of primary school.

“Most [Somali inmates] were illiterate. Some now have even taken exams,” says the warden, who preferred not to be named.

The UN office on drugs and crime has poured funding into counter-piracy measures such as this one.

“We are extremely careful to ensure that our support also benefits the rest of the prison population and the staff of prisons holding Somali pirates, to ensure that the Somalis are not resented,” says Shamus Mangan, a maritime crime expert. Mangan has assisted with the repatriation of a number of Somalis and notes that the provision of education, food and healthcare is no substitute for freedom.

“Each time I go to the prison in the Seychelles, all the Somalis there ask me when they will be able to transfer to Somalia,” he says.

The UNODC says that, ultimately, the problem needs to be remedied on Somali soil, addressing the root causes and not the symptoms.

Somalia expert Mary Harper warned recently that the pirates are “sleeping”, but have not gone away. Speaking at a maritime security event, she said: “Somalia is becoming more politically fragmented with many different groups seeking to gain dominance, which potentially creates a favourable environment for piracy.” Risk factors such as high youth unemployment and a lack of alternative livelihoods prevail.

The UN’s development programme runs rehabilitation programmes in Somalia. One former piracy suspect who spent three years in jail, Mohamed Ahmed Jama, took classes in business and social skills. “I believe now I have a chance for a brighter future,” he says.

The former pirates are in sharp contrast to other inmates at the prison. “The other inmates escape,” says Samuel Tonui, acting head of the Shimo la Tewa prison. A handful of Kenyan inmates have given prison guards the slip this year. Last month, two inmates escaped, using a homemade ladder, the second prison break in four weeks at the facility. There is an escapee wall of shame where the faces of a dozen men are displayed. None are Somali pirates.