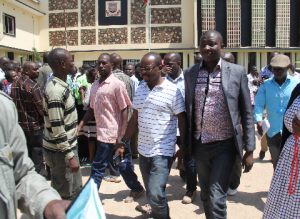 Intense lobbying is underway for the Homa-Bay senatorial ODM nominations ticket after the seven party aspirants agreed to support whoever selected by the party National Elections Board in concurrence with the party’s National Executive Committee.

Fred Rabonga and Caroli Omondi have been sidelined despite alleged feeding of some NEB members with good ‘chicken’. Caroli’s past comments that were critical on party leader Raila Odinga is reason for his low ranking.

Engineer Okundi is a past chairman of the party National Elections Board and is believed to be using his network to outdo the mashinani sensation Silas Jakakimba and the sympathy seeking Moses Kajwang. Eng Okundi is a personal friend to Raila a situation he is said to be exploiting to the maximum.

Jakakimba being shortlisted as the top 3 NEB favourites is no surprise, as a trusted aide to party leader, his ground mobilization skills as was exhibited in during the launch of his candidature in Homa-Bay town and the endorsement by the Suba elders are some of the considerations NEB may have taken into account. NEB is reportedly worried of a possible fallout especially among the youth and women voters in Homa-Bay if Jakakimba is not on the ballot. Jakakimba took social media by storm and was quickly able to rally both young and the aged across the County for a very a successful campaign launch that prompted some aspirants to import goons from Nairobi to stop party nominations. It is is obvious to many in the county that Jakakimba has popular vote.

Moses Kajwang’ was endorsed by the Kajwang’ family to inherit his brother’s seat and it was assumed to be an easy ride, his inability to mobilize the ground and sole dependency on his older brother and Ruaraka MP TJ Kajwang seem to be his undoing. As days turn into weeks and weeks into months the emotional pull of the Waondo clan is calming down and the so called sympathy votes are diminishing fast a reason why NEB is considering Jakakimba who seem to have ground numbers and a uniting profile that can easily defeat Hilary Alila an independent candidate.

Meanwhile IEBC has moved the Homa-Bay by-election date from 2nd February 2015 to 12th Feb 2015 in line with the court order that extended the party nominations exercise by 10 days.