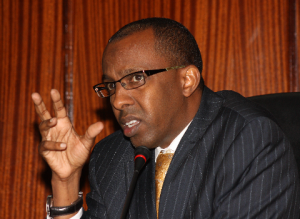 Public sympathy, and raw tribal posturing, does not wash guilt in the new Kenya. After shouting horse and answering irrelevant questions, doomed Judiciary Chief Registrar Gladys Shollei has failed to convince anyone that witch-hunt led to her thunderous fall, a few months after she botched up Supreme Court investigations into the vote recount, and attempted to irregularly purchase an on old posta building in Mombasa for a whooping Ksh900 million, a figure she over-quoted with at least Ksh200 million. Revelations by Lawyer Ahmednassir, the LSK representative in the JSC now reveals.

Echoes of Shollei’s pussyfooting with the rule of Law did not start yesterday, rather, insiders in the judiciary had all along raised concerns about her high-handedness and a series of other usurpations which bordered on political correctness. A case often cited is the composition of the judiciary staff appointments which is steeped in favouritism, nepotism and ethnic dishwater.

That Shollei received a rare defense from one Francis Kimemia, a man with fading institutional relevance in this new order, revealed a lot of the filth accumulated in the Office of the Chief Registrar of the judiciary. But this is just the tip of the iceberg.

First Shollei’s pretentious concerns that she is not being offered due process of the law is empty, to be polite. We had Nancy Baraza before her who was investigated by the same JSC and found wanting, and procedurally dismissed. It should be clear to Kenyans that ALL Judicial Service Commission members unanimously agreed to have Shollei investigated, contrary to her insinuations that there existed a split. The members only disagreed on whether she ought to continue serving or stay away for the period of the investigations, to which, a majority sent her packing.

Second, this mad woman’s accusations on Commissioners Ominde, Warsame and Ahmednassir does not hold water at all. Where are the corroborative evidences? Â Just saying Justice Warsame wanted ‘his people’ to be employed; or commissioner Ominde begun ‘fighting’ her from day one, is only meant to give her the kind of tribal and emotional sympathies she now enjoys; but justice deals with the law, not public opinion.

â€œI am a no-nonsense individual who does not entertain laziness even to my own children. I am very clear in what I want. I work very hard, I am respectful, but above all, I donâ€™t take nonsense.â€ Very true, but Kenyans also do not take lightly a civil servant so rude that she cannot work under instructions.