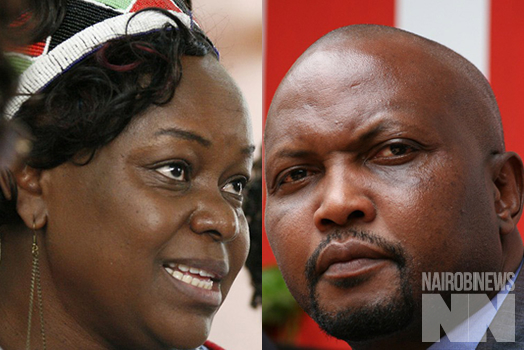 Gatundu South Member of Parliament Moses Kuria is alleged to have sexually assaulted Mbita MP Millie Odhiambo in parliament yesterday during the debate on security bill. Â According the MP and several other legislators, Kuria attempted to pull the inner garments of Hon. Millie Mabona as other TNA MPs, tried to undress her. Parliament yesterday degenerated into chaos following the heated debate on the security bill which the opposition rejected as draconian.

Sexual assault in the manner of stripping women has in the recent past increased in Nairobi with Matatu touts openly undressing women they claim to have dressed improperly. At least two touts are facing robber with violence charges after they publicly stripped a female passenger naked and robbed her of valuables after pinching her private organs while capturing on a video which went viral online.

The sad thing about these revelations about Kuria, an MP on a TNA ticket is that most of the youths who are stripping women are also alleged to be associated with TNA.

President Uhuru, who is the TNA party leader, is yet to publicly condemn sexual assault on women by people associated with his party and the acts seem to be rising with now the reports on Kuria.

Sources say Hon. Millie Odhiambo has already recorded a statement with the police although the assault happened in the floor of parliament which is a privileged with immunity against prosecution, but it remains to be seen whether any action will be taken against Kuria who seem to have powerful connections and friends within the executive and the judiciary in Kenya.

Today was a day and a half but am happy we fought against tyranny though we lost partially. Our strategy worked and they don’t even know. In the process notable incidents: My security was disarmed, manhandled and thrown in the cells for a while. Muturi started off the session by reading us the riot act and threatening to send us home for re-elections. We tell him “Go ahead”. Jubilee Mps went and physically attacked senators Muthama, Orengo, Khalwale, Wetangula and Ongera at the public gallery and we repulsed them. We managed a stalemate whole morning. Afternoon they came back better prepared. Many Mps beaten up. I was boxed in the eye by Moses Kuria as one permanent drunk pulled my panty and another two pulled up my dress. But I am not of the ” ayayayaya you slapped me fame!” Moses Kuria amejua why am MP Mbita elected and not appointed. Plus learn, we pride as a people in nakedness Na wamejua. When they tried to undress me I completed the process for them. I am fearfully and wonderfully made and have no embarrassment over my body. I can not and will not be intimidated using my sexuality. Anyar gi Mboya, nyakwar nyobiero, nyamin Captain. Ok unyala. One MP had even told us they have to kill one of us. He is ordinarily my friend. I excuse the temporary madness. CORD MPs am so proud of you. If you bear any number 2 to your name. The joke is on you.