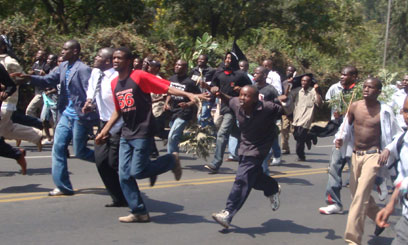 Now, the government is indeed idle, a contingent of police was dispatched to university of Nairobi, vandalized the university library and arrested more than 100 students who were busy studying in the guise of stopping riots.

The most unfortunate thing is that most of those arrested were Uhuru Kenyatta supporters who had decided NOT to join other students in protests against the increased fees, they had basically refrained from taking into the streets to protect their tribesman.

In a video captured by the local media the police are seen breaking into the university library and arresting students mostly female students (WATCH VIDEO from minute 2.50 to minute 4:50 below and be the JUDGE)

The police trespassed the university property, they had NOT been called by the university administration to intervene and therefore police must release all the students arrested without any conditions.