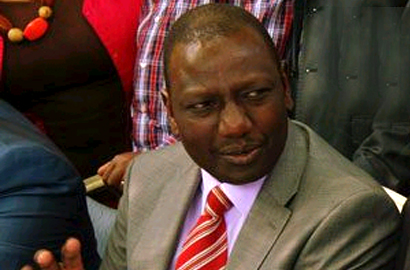 Politicians and observers from the South Rift argue that a silent rebellion against Deputy President William Ruto over the referendum push portends bad times for the United Republican Party. Those in support of the push by the Council of Governors in South Rift â€“ Isaac Rutoâ€™s home turf â€“ caution that the mood is becoming hostile against the DP.

Former Bomet Mayor Socrates Sang says Governor Ruto has always stood by the DP, but the latter has betrayed the trust and that of the people of the South Rift. â€œIt was Ruto (Isaac) who led MPs in the last Parliament in fending off attempts to pass a vote of no confidence against the DP on the maize scandal when he was Agriculture minister.

The governor marshalled the people of Rift Valley to hold prayers for the President and DP when they were named as key suspects over crimes against humanity by the ICC,â€ said Sang. He said the DP wants to destroy the bridge he used to get to where he is.

â€œIf the Jubilee leadership continues with threats and intimidation, then they are staring at the reality of a historic one-term presidency,â€ said Sang.

Kuresoi South MP Zakayo Cheruiyot said the DP had failed to stand by his people and deliver the promises he made. â€œThese counties sacrificed and expected a 50-50 scenario in the Jubilee administration. This rebellion has got everything to do with the management of URP. Its management is far from wanting,â€ he said, adding that there has never been a meeting to allow URP leaders address emerging issues and take a common position.

He says the governors are only championing their peopleâ€™s interests, adding the region views devolution as a cure to injustices, lack of development and other ills that have bedeviled them. â€œDevolution is close to the hearts of the people of South Rift. To them, devolution heralds good roads, schools and proper health facilities and will resist anyone telling them to wait for another 10 years,â€ said Cheruiyot.

He claimed his party, URP, had resorted to political gimmicks to silence those with dissenting voices. The MP said the way the DP manages the region will determine his future political standing.

â€œWe agreed as URP that harambees are no cure to development issues. The DP is not doing well with his political musketeers who are fond of issuing unsavoury remarks against other elected leaders,â€ said Cheruiyot.

Gaining support Former Rongai MP Lucas Kigen while supporting the governorâ€™s push, said it is gaining momentum because of the skewed manner the central government was been allocating resources and making State appointments. Kigen said the South Rift, though in Jubilee, feels left out and the only avenue for redress is through a referendum.

â€œThe region feels that the DP has not clearly articulated their interest. He claimed TNA governors had pulled out of the referendum push because the interests of their people is well catered for by Jubilee. â€œMost TNA governors come from the same region with the President. Why should they oppose the government with a president from their backyard?â€ he said.

He said devolution is not about the DP or any other personality but an ideology that Kenyans love. He accused Parliament of creating some laws that are anti-devolution and warned that the region will oppose any attempts to kill the new order.

Former Bomet County Council chairman John Kalya said the push for a referendum by the region is because it has been left behind on development. â€œYou cannot compare Central Kenya with our region. We are opposed to anyone who will want to deny us more money coming to the counties. If the DP is against this, then he should not count on our support,â€ said Kalya.