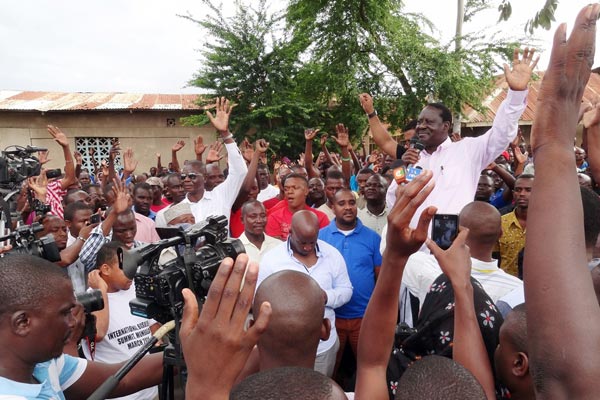 Opposition leader Raila Odinga on Sunday Â claimed that the gunmen who stormed an estate in Likoni and shot dead three people had been sent by the government.

Speaking at Ushindi Baptist Church in Likoni on Sunday, the ODM leader said the government was shielding the killers. He claimed that Cord had the names of the gunmen.

â€œWe have the names but we know they will not be arrested because they sent them,â€ Mr Odinga said of the July 21 attack at Soweto in Likoni.

After the attack, the hooded killers, who numbered between six and eight, dropped leaflets claiming they were avenging the killing of their people in Mpeketoni, Lamu County.

On Sunday, Mr Odinga demanded that Mr Marwa substantiate his allegations or be arrested for spreading falsehoods.

â€œThe people who were killed in Lamu were innocent Kenyans. Instead of arresting the killers, you send gangs to kill other innocent people in Likoni. What kind of a government is this that kills its own people?â€ he asked.

Mr Odinga also told off Lands Cabinet Secretary Charity Ngilu who spent most of the day visiting Lamu and Tana River counties accompanied by surveyors. It was in readiness for a 100,000 title deed-issuing exercise by October.

Mr Odinga said Mrs Ngilu had no business meddling in land matters because Jubilee officials intend to grab tracts of land whose 99-year lease had expired.

â€œThe Cabinet Secretary should leave the registry for clerks,â€ he said adding that her intentions were suspicious.

He said Cord recognised that the mandate to revoke the 500,000 acres in Lamu lay in the hands of the National Lands Commission and not Mrs Ngilu.

He also accused the government of arresting Lamu Governor Issa Timammy over the Mpeketoni killings without any evidence.

He said without proper security, it would be difficult for Kenyans to have better lives and development.

â€œInsecurity across the country as experienced in Wajir, Mandera, Lamu and Mombasa is enough evidence that the government has failed,â€ he told the congregation.

The former Prime Minister urged Kenyans to desist from engaging in religious wars and co-exist peacefully.

Senator Hassan Omar said Kenyans were living in difficult times and everyone was feeling the impact.

He said some of the leaders were against the Constitution because of land matters and now were hoodwinking Kenyans that they would provide solutions.

â€œThese people cannot be trusted to bring change. It is through referendum that these issues can be sorted,â€ he said.