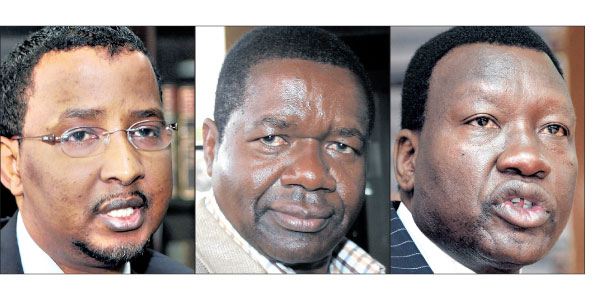 Kenyaâ€™s election officials pocketed millions of shillings in bribes to award lucrative printing contracts to a UK company over a two-year period, prosecution documents filed in a London court show.

In a legal battle that has left in its wake one of the best documented cases of an international corruption network in Kenyaâ€™s history, the UK prosecutors have filed in court loads of written evidence implicating senior election officials in the corruption ring, including Independent Electoral and Boundaries Commission (IEBC) chairman Issack Hassan.

Court documents show that the Kenyan taxpayer paid dearly for the illicit dealings between senior Smith & Ouzman (S&O) officials and the senior managers and commissioners in the defunct Interim Independent Electoral Commission (IIEC), putting to shame Kenyan prosecutors and the anti-corruption agency officials who have yet to nail anyone for the offences.

â€œThe scale of the corruption alleged by the prosecution is worth Â£349,057.39 (Sh50 million) in Kenya,â€ the prosecutor Mark Bryant-Heron says in court filings.

For many of the printing contracts, costs were inflated by up to 38 per cent mainly to cater for the kickbacks â€” commonly referred to in the mails as â€˜chickenâ€™ â€” to senior election officials, the UK prosecutors say.

The prosecutors say â€œthe corrupt payments were built into S&Oâ€™s pricing of the printed materials so that the inflation in the price as a result of that corruption was passed onto those funding the institutions that contracted with S&O.â€

Energy secretary Davis Chirchir, who worked as a senior manager at the IIEC, tops the list of senior government officials named in the corruption racket.

The SFO is the UKâ€™s independent agency that investigates and prosecutes serious and complex fraud cases, including bribery and corruption.

The UK managers have been charged under the European nationâ€™s Prevention of Corruption Act (1906) which prohibits use of inducements to employees of foreign governments to influence decisions and win business deals.

The prosecutorâ€™s case is that senior managers at S&O, including Christopher Smith (former chairman), his son Nick Smith (sales and marketing director), Tim Forrester (international sales manager) and Trevy James Oyombra, the Kenyan agent, made hefty payouts to Kenyan officials to influence the award of printing contracts to the UK firm.

The kickbacks, amounting to Sh49.3 million at the current exchange rate, covered election materials for the 2010 Constitution referendum, four parliamentary by-elections held in Shinyalu, Bomachoge, South Mugirango and Matuga as well as a host of civic poll

The fresh allegations of impropriety at the Issack Hassan-led IIEC, which morphed into the IEBC in November 2011 following the enactment of a new Constitution, come in the wake of a recent wave of arrests and prosecution of senior IEBC officials over the procurement of materials for last yearâ€™s election.

The fact that a number of senior officials alleged to have benefited from the corruption ring, including the chairman, transited from IIEC to IEBC, puts the integrity of IEBC to question. S&O was single-sourced by the IEBC to print ballot papers and supply other electoral materials for the March 2013 General Election.

â€œCorruption in the public sector hampers the efficiency of public services, undermines confidence in public institutions and increases the cost of public transactions,â€ the SFO says in a statement.

The blow-by-blow account of the multi-million-shilling international corruption ring claims that S&O transferred the payments to Mr Oyombra, its Kenya agent, who would draw the money and distribute to senior election officials.

The funds were mostly transferred from the UK to Mr Oyombraâ€™s accounts held at KCB for further distribution to beneficiaries.

Mr Oyombra previously worked as a procurement officer with the defunct Electoral Commission of Kenya (ECK) and therefore had access to privileged information at IIEC.

Court documents show that Mr Hassan on December 3, 2009 emailed Mr Smith inviting S&O to tender for a contract to produce 18 million voter registration cards in a deal valued at Â£278,838 (Sh39.4 million) but Mr Oyombra had already emailed his bosses the tender invitation two days earlier on December 1, 2009, indicating that he had the information ahead of publication of the tender.

â€œThis tender for IIEC will be ours thanks to Dena pushing,â€ Mr Smith said in an email after discussing the matter with his local agent, Mr Oyombra.

Dena, whose other name is not given, is described in the suit papers as an â€˜individual who assisted S&O to arrange bribes for Kenyan officials.â€™

One other individual said to have been pivotal in the working of the bribery ring is Hamida who the UK prosecutors describe as â€˜an individual connected to Oswagoâ€™.

SFO detectives retrieved a trail of damning e-mail exchanges between S&O and Kenyan election officials, shipping invoices and local purchase orders (LPOs) used by the procuring entities to build the case against the UK managers.

The documents show that Kenyan election officials in one instance inflated the price of each of the 14.51 million ballot papers ordered for the referendum in 2010 by a margin of Sh0.75, translating to Â£105,193.82 (Sh14.8 million) in kickbacks paid back to them through Mr Oyombra.

Mr Oswago, Mr Smith and Mr Oyombraâ€™s alleged negotiation of the bribes is captured in a series of emails exchanges and telephone conversations held in May 2010 â€” barely three months to the plebiscite.

â€œMy guys are after money yes, but this should not make us not win the tender. These people are only in IIEC till the end of the year so they are after making money and they will play game with whoever puts what they want,â€ Mr Oyombra wrote in an email to his bosses in the UK.
The cost of the bribes to Mr Oswago and the IIEC team and a further inducement of Sh0.08 per ballot paper to Mr Oyombra, inflated the original printing price of Sh2.30 for every ballot paper by 36 per cent to Sh3.13.

â€œThe prosecutionâ€™s case is that the defendants (S&O) used commission payments to these agents to mask corrupt payments to public officials who were in a position to influence the outcome of the tender for the business.â€

Those named as having benefited from the fresh voter registration deal ahead of the 2010 referendum include Mr Chirchir, who is said to have travelled to London to visit S&Oâ€™s factory and â€˜review progressâ€™ on the tender.

â€œDena and Chirchir will be in London and would like to meet you on Monday,â€ Mr Oyombra said in an email to Nicholas Smith dated February 4, 2010 adding that Mr Chirchir and fellow electoral officials â€œwere looking for a figure of Sh10 million for emself (sic), commissioners and others.â€

The email correspondence reveals that S&O was to â€˜take care of their travel expenses of the IIEC officials within the UK in case they need to roam around and maybe hotel.â€™

And in a line that suggests widespread knowledge of the corrupt payments within the IIEC, Mr Oyombra wrote to Nick Smith warning him not to pay any money directly to the visiting officials as they were accompanied by government officials who were not aware of the ring.

â€œIf we had Shollei, CEO [Oswago], Chirchir, Nyaundi and the finance dir, proc man [Karani] they would understand as they are the ones driving this [sic] orders to us,â€ said Mr Oyombra.

The prosecutors claim that the Kenyan officials, including Mr Chirchir and Mr Oswago, received bribes totalling Â£88,840 (Sh12.5 million) which was coded as â€˜chickenâ€™ to be shared by the commissioners and senior IIEC officials

â€œIâ€™ve spoken to the CEO on delivery of forms and he will get back to me tomorrow. Heâ€™s so happy Iâ€™ve mentioned that chicken will be with me on Friday or Saturday. I hope you will be able to make the debit transactions to me today to facilitate me to have the payments done to them by Saturday latest,â€ said Mr Oyombra in an email.

The prosecutors further allege that Mr Oswago and other IIEC officials deliberately tilted tender decisions in favour of S&O and kicked out other competitors on frivolous grounds.

â€œHe (Mr Oswago) believes in S&O and thatâ€™s what is important and weâ€™ve given him money for the votersâ€™ card and after payment for balance and pouches we are set to give him Â£21,000 Sh2,100,000. So he knows we can deliver both materially and money and I think this goodwill is important,â€ Mr Oyombra said in an email he wrote on May, 1, 2010.

The prosecution also alleges that prices of election materials for the Matuga and South Mugirango by-elections and for various civic polls jumped 34 per cent to Â£69,626.04 from an initial price of Â£52,079.80 after factoring in the kickbacks to Kenyan election officials.

The prosecutor told the London court that the kickbacks from the by-elections deal totalled Â£12,686.61 (Sh1.8 million).

â€œFollowing a further meeting between Oswago and Trevy (Oyombra) the value of these contracts rose again. This was done, the prosecution suggests, to enable the payment of bribes to officials whilst maintaining some profit for S&O.â€