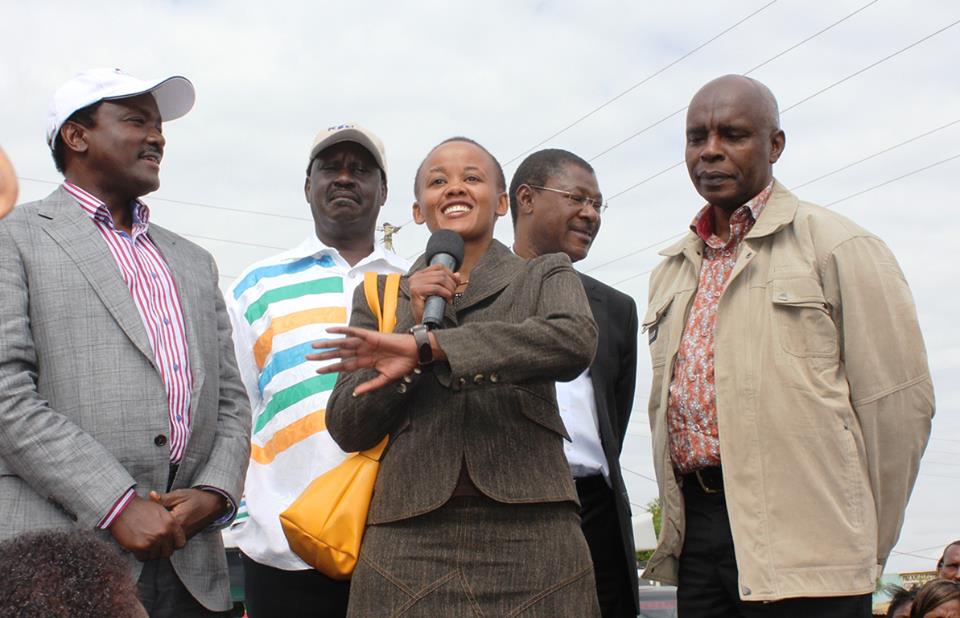 UHURUâ€™S party TNA now writes to IEBC to bar Kethi Kilonzo from the Makueni Senate by-election on grounds that she is not a registered voter. Here is the letter.

The National Alliance (TNA) wishes to formally communicate to the Independent Electoral and Boundaries Commission (IEBC) its grave concerns regarding the ineligibility of a candidate for the Makueni County Senatorial by- election.

Section 24(1)(a) of the Elections Act (Chapter 24 of the Laws of Kenya ) prescribes that one of the qualifications necessary for a person to be nominated by a political party to contest for a Parliamentary seat ( whether National Assembly or Senatorial) is that one must be a registered voter. Section 24(1) is reproduced below.

24. (1) Unless disqualified under subsection (2), a person qualifies for nomination as a member of Parliament if the personâ€”

(a) is registered as a voter;

(b) satisfies any educational, moral and ethical requirements prescribed by the Constitution and this Act; and

(c) is nominated by a political party, or is an independent candidate who is supportedâ€“â€“

(i) in the case of election to the National Assembly, by at least one thousand registered voters in the constituency; or

(ii) in the case of election to the Senate, by at least two thousand registered voters in the county.

It has come to the attention of TNA that Ms. Diana Kethi Kilonzo, the Wiper Democratic Party candidate for the Makueni County Senatorial by-election, is not a registered voter. Our perusal of the voters register has confirmed that Ms. Kilonzo does not appear on the roll, nor is there any voter registration for Kenya National Identity Card Number 21216762, which is Ms. Kilonzoâ€™s Kenya National Identity Card Number.
We are also reliably informed that due to the fact that Ms. Kilonzo was not a registered voter, she did not vote during the March 2013 General Elections.

TNA urges the IEBC to reject the proposed candidature of Ms. Kilonzo on the grounds that she is not legally qualified to contest for a Parliamentary Seat under the relevant Section of the Elections Act. Further we wish to remind the IEBC that it does not have the legal authority to register any new voters with respect to either this by-election. Section 5(1)(b) of the Election Act states:

5. (1) Registration of voters and revision of the register of voters under this Act shall be carried out at all times exceptâ€”

We are also aware that the disqualification of Ms. Kilonzo means that the Wiper Democratic Party will not be able to nominate another candidate to vie in the by-election in her place. This is by virtue of Section 13(2) of the Elections Act which states:

(2) A political party shall not change the candidate nominated after the nomination of that person has been received by the Commission:

It is instructive to note that based on Ms. Kilonzoâ€™s disqualification under Section 24(1) of the Elections Act; her participation at this by-election, either as a candidate or as a voter would be a criminal act pursuant to Section 58 of the Elections Act; punishable by a fine not exceeding one million shillings or to imprisonment for a term not exceeding six years or to both.

Additionally, TNA would like to draw the attention of the IEBC to the provisions of Section 59(1) of the Elections Act, regarding Election Offenses by Members and Staff of the IEBC.

We are all too aware that the IEBC will no doubt come under intense pressure to sweep this issue under the rug from powerful undemocratic forces who have no respect for either the Constitution or the Rule of Law. However the IEBC must remain steadfast and apply the Law without fear or favour.

Given the fact that Ms. Kilonzo is an eminent lawyer of long-standing, she must have known that she is not legally eligible to contest in this Election. As an Advocate of the High Court of Kenya, who has sworn to uphold and defend the Constitution and the Rule of Law, she was bound by that solemn oath to decline nomination knowing full well that she was not legally qualified to stand for election. Unfortunately, she did not do the honourable thing and decline the candidature and it now falls on the IEBC to apply the Law of the Land.

While appearing before the Supreme Court of Kenya in an Election Petition; Ms. Kilonzo urged the Court to â€œfearlessly uphold the Constitution and the Elections Act, regardless of the consequences.â€ We urge the IEBC to heed Ms. Kilonzoâ€™s own words.
Yours Faithfully,