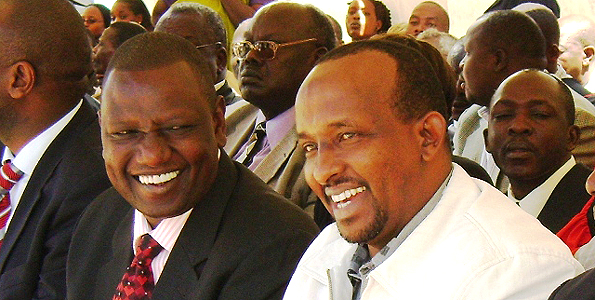 United republican party mps allied to deputy president william Ruto were ejected from a funeral in Nandi over the weekend after they attempted to discredit the Nandi hills mp Alfred Keter in whose constituency the burial was taking place.
Trouble started when the master of ceremonies Philemon Bureti who is the former warrant officer in and a chaplain in the army opened an onslaught on Keter during the burial of octogenerian Joseph Kiprop Lelei in Taito Location.

As soon as he started welcoming the mps and senators to give their condolences, the crowd started booing the guest as they were attacking their mp for not collaborating with the Deputy President and antagonising the government.
Hell broke loose when parliamentary leader of majority Aden Duale claimed that Keter was not fit to be even a member of county assembly claiming that he was a thorn in the flesh and that his politics was below standards.

Nandi senator Stephen Sang was also shouted down when he claimed that Keter had no documents to prove his case against the construction of the standard gauge rail whose costs is running into trillions. He was shouted down by mourners who told him to his face that he had no experience in politics as he only stood on URP, opposed Kosgey and won on euphoria.

Elgeyo Marakwet senator Kipchuma Murkomen had earlier alleged that Keter was unfit to be mp as his attacks undermined the URP and the Jubilee government. There was complete pandemonium and heckling as speeches were interrupted with jeers from mourners who were unaware that Keter was coming on foot.

There were ululations when Keter arrived on foot as the mourners burst into allulation and cheers when they saw him.

It was whisphered that deputy president William Rutto was to attend the burial after attending the home coming of Vihiga Mp Yussuf Chanzu but had secretely send the URP brigade to test the ground.

Keter arrived while senator Murkomen was in the middle of his attacking speech when he received a standing ovation from mourners thereby interrupting the program. Embrassed with the unfolding scenerio, the URP brigade dashed to the waiting chopper as word reached the mourners that Ruto had decided to skip the burial after learning that Keter had decided to attend.