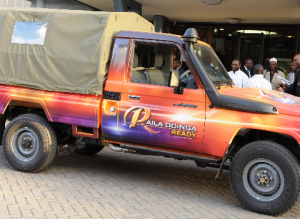 It is now emerging that immediately after the Supreme Court ruling the powerful aide and top civil servant at Raila’s office unbranded the 47 ODM presidential Campaign vehicles then sold them off in the open market without the knowledge of the party leader what a con!

The aide subsequently vanished with about Ksh. 2 billion that the CORD Presidential Candidate had entrusted in his custody for purposes of the anticipated Presidential Run-off. To date, the man is playing hide and seek with the party leadership.

These are supposedly the cash he has been using over the past one year to buy real estate all over the world. Some of cash has found its way to Harambees in Nyanza where someone was being declared an elder.